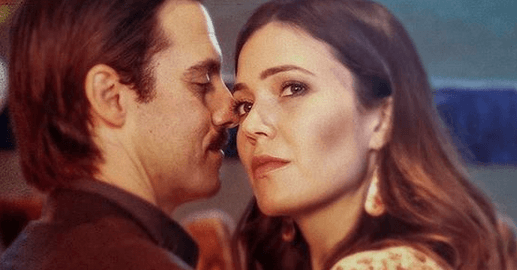 The finale of NBC’s This Is Us Season 3 left fans wondering what is going on with Mandy Moore’s character, Rebecca Pearson. Fortunately, the show has been renewed for three more seasons, which leaves plenty of time for the story to unfold.

At the very end of Season 3 of the show, we saw a flash-forward of a frail, elderly Rebecca laying in a bed in son Kevin Pearson’s home. The rest of the Pearson family members are arriving to be with their mom, but it’s not said what’s going on. The scene looks to be around 15 to 20 years in the future.

In the finale, we learned that Beth and Randall stay together. This is despite their marriage troubles throughout Season 3. The scene takes place in Kevin’s home and it looks like he has a son. It’s unclear whether he’s married or if his significant other is present. The finale also hints at the fact that Kate and Toby have split up.

Obviously, the biggest part of the finale is Rebecca’s current state. Miguel isn’t shown, which makes fans think he passed away prior to the scene. When Randall makes it to Rebecca’s bedroom, Jack’s brother Nicky is watching over her.

Since the finale aired, fans have speculated about it. They are saying that Rebecca was probably on her deathbed. Some believe that she has Alzheimer’s or another serious condition. Still, this is all speculation. We have yet to get an explanation about what’s going on.

Prior to the finale airing, Moore shared a photo on Instagram giving fans a preview of what was to come. In the caption, she said, “The future is here. #ThisIsUs.” Still, this couldn’t prepare fans for the final scene of the Season 3 finale episode.

The future is here. #ThisIsUs

Mandy Moore opens up about the future of This Is Us

Because so much happened in the finale of the show, fans were left with a lot of questions. It looks like fans will have to continue to speculate for a little while. Moore did share what she could and talked about the future of the show and her character.

Moore recently chatted with TVLine and said, “The end of that episode left us with so many questions. I know that we’re not going to dip into that world with my character too much, because you sort of need to let it marinate a little bit and you want to use it with great impact.”

Fans who want to learn more about Rebecca and her frail state in the flash-forward will have to wait. Moore commented on what to expect in Season 4. It seems like this upcoming season will be about Jack and Rebecca early on.

Moore said, “This season … we’re gonna kind of follow them back from that road trip in California to back to Pittsburgh and really see how they become a couple. I’m curious to see, like … how does he really open himself up, how do they get engaged? There’s so much of that really defining time in their relationship that I’m curious to explore.”

Are you looking forward to the upcoming seasons of This Is Us? Are you nervous to see what happens? Let us know in the comments!

Don’t miss This Is Us when it returns to NBC!