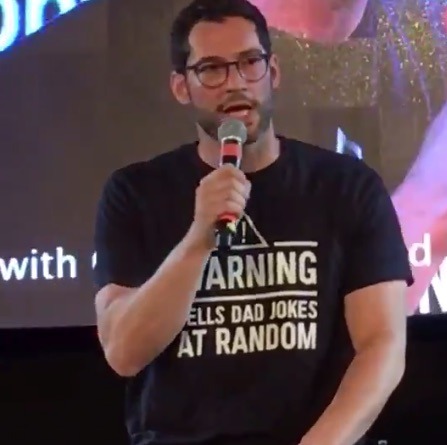 Jus In Bello Con has just kicked off in Rome, where Tom Ellis has already been speaking  to crowds of Lucifans about Season 4 and Lucifer music. He has made fans a musical promise. Could there finally be a Lucifer soundtrack? Warning: If you have not seen Lucifer Season 4 please note that there are spoilers. Please watch all of Season 4 first.

Lucifer Morningstar himself, Tom Ellis, has returned to Jus In Bello Con to promote Lucifer. Jus In Bello Con in Rome features stars from Lucifer, Supernatural, Avengers, Grimm, as well as others. Besides Tom Ellis, Graham McTavish, who is portraying Father Kinley this season, is also a featured guest. Lucifans have generously shared photos and video clips from the convention, and it looks like Ellis is in top form.

Dressed in a t-shirt with the inside joke “Warning: Tells Bad Dad Jokes Without Warning,” he has been answering questions and basking in the fan love of Lucifer Season 4. Fans have been floored by the new season numbers. Tom shared that “a lot of people been asking if there will be a release of the songs in the show.” He then revealed, “I think I may take this into my own hands.” He then asked the cheering crowd what they thought about if they would “record them and put them out there.”

He said it to a crowd and fans recorded it. Now all Lucifans will hold Tom Ellis to accomplishing this feat. Fans of the Lucifer music on the show want to stream the cast sung songs that they love. This would be a great thank you to the fans for their non-stop support of this show. We can hope that Tom Ellis can make it happen!

Please credit if using it 🙏🏻 pic.twitter.com/JbUZTYqLHs

Throughout the first three seasons of Lucifer, there was a huge dose of 90s music, and Season 4 is no exception. The first season with Netflix begins with Lucifer Morningstar at the piano, at his bar Lux. He is repeatedly performing Radiohead’s classic song “Creep,” making the depressing lyrics his own autobiography, as Chloe Decker has left and he fears she will not be returning.

In the ninth episode of the season, entitled “Save Lucifer” Mazikeen (Lesley-Ann Brandt) sings the romantic Oasis song “Wonderwall” surprising fans at how good she can sing! The day after the show dropped, Brandt thanked showrunner Joe Henderson for letting her pick the song she wanted to sing, and for writing this tender episode. This fitting song was for Maze’s “grand gesture” towards Eve. It was a showstopper!

Brandt has shown herself to be entertaining in her physical action scenes, and showing her comedic chops in her new role as bounty hunter. But, in Season 4, she was able to show a more emotional and vulnerable side of Maze. Her interpretation of “Wonderwall” epitomizes her character’s pent up passion, making this one of the highlights of this excellent season.

Spoiler Alert. I wanna take the time to thank @Henderson_Joe for trusting me and going with my song choice for this moment. Thank you for giving me a chance to show this side of Mazikeen and for writing it. And my badass director @LisaDemaine1 for guiding me through this. https://t.co/bYrvyoUPbH

Fox Canceled Lucifer One Year Ago

What a difference a year makes. Last year, during this same week, Tom was in Rome at the same convention, getting a lot of fan support. Fox surprised everyone and canceled Lucifer, and shocked the cast and fans. Netflix saved the former Fox show and now the fans are ready to talk about Lucifer Season 5. Some Lucifer music will certainly help make another wait more fun.

Have you streamed all 10 episodes of Lucifer Season 1o? How many times have you seen it? Which is your favorite musical performance? Would you like to stream the Lucifer songs? Share your comments below.

Lucifans are now awaiting Netflix’s announcement that they are renewing the show for Season 5. Generally, Netflix waits a month after a show drops before making any sort of renewal announcement.