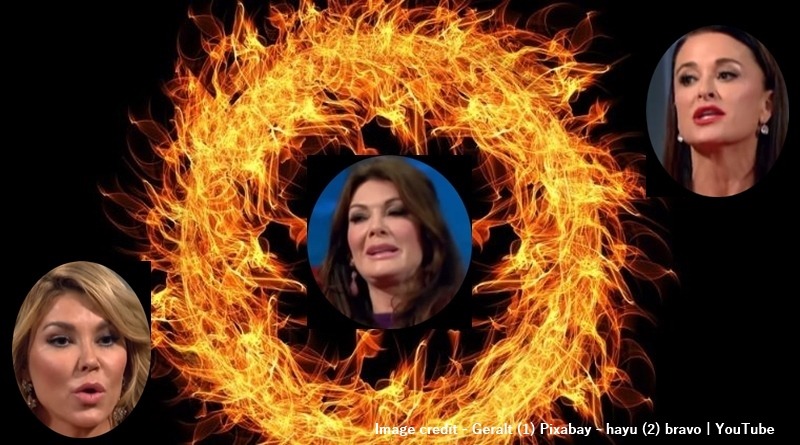 RHOBH fans know that the dynamics among the women on the show constantly shift. A friend today could be an enemy the next, and working with frenemies becomes awkward. However, it seems Kyle Richards and Brandi Glanville get along just fine right now. Lisa Vanderpump (LVP) and Brandi had their run-ins as did Kyle this season, over the ‘Puppy Gate’ scandal.

Back in 2015, Brandi and Kyle got into a major altercation, with Kyle flipping out at Eileen’s get-together. It came after Brandi told Kyle she was ‘”acting stupid’ because she was so bad at poker,” Bustle reminds us. Fans of Real Housewives of Beverley Hills may recall that before that scene. Brandi and Kyle seemed happy together, but later, Brandi seemed a bit under the weather after some medication and drinks.

Additionally, in their write-up, Bustle said, “Brandi tried to leave with Kim, but Kyle kept trailing behind wanting to speak with Kim. There was a bit of a scuffle between Kyle and Brandi, which resulted in Brandi shoving Kyle a bit.” Okay, just another average drama in Bravo‘s  RHOBH, but Kyle knows how to hold a grudge.

Kyle Richards gets along fine with Brandi Glanville, allied against LVP?

E! News reported that Kyle spoke about Brandi on the Just the Sip show. During her conversation, she talked about bumping into Brandi again, and “she was as nice as could be.” Kyle adds that they saw each other around town, and there’s been no nastiness from Brandi at all. Plus, while Kyle’s still blocked from Brand’s Twitter, they follow each other on Instagram.

It looks like the two RHOBH stars may not be best friends yet, but they might have a single common frenemy in Lisa Vanderpump. After the scene at Villa Rosa this season, when Ken and Lisa told Kyle to get out of the house, Brandi took to her Twitter. Hollywood Life noted that she posted, “Lvp & Ken lost their f***ing minds tonight physically getting in Kyles’ face.” Could the two women be bonding in an alliance again as they both went off LVP?

Digging a bit deeper into the tale of happy endings and “bygones being bygones” between Kyle and Brandi, Hollywood Life came up with something else. According to them, a source said that “Brandi actually reached out to Kyle and they recently started following one another on social media again.” Their source added that they share a common bond, as “They’ve spoken a few times about Lisa and this season of RHOBH and they now laugh at the fact they haven’t spoken for all of these years, so they thank Lisa for bringing them back together.”

So, there you have it. There’s even mention that Brandi does a Cameo on the next season, but it’s unlikely LVP will be there. After all, Kyle and Brandi together might really be too much for her to deal with. Once upon a time, LVP and Brandi were friends, but that too turned into a frenemy situation.

What do you think about Kyle Richards and Brandi Glanville letting “bygones be bygones?” Do you think it’s an alliance against LVP that accounts for this sudden renewal of an old friendship? Sound off your thoughts in the comments below.