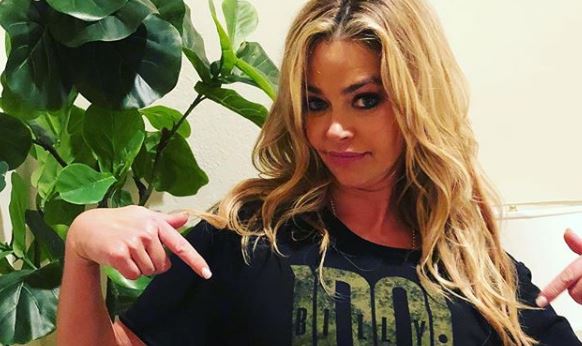 Denise Richards is a refreshing addition to this season’s Real Housewives of Beverly Hills. She’s quickly become a fan favorite because of her down-to-earth personality. She also has a less than glamorous clothing choice compared to the other ladies.

An iconic moment happened in the Bahamas that will go down in RHOBH history. The ladies were meeting for brunch and everyone else was dressed to the nines with heels. Denise was wearing shorts as a normal person would. She even cracked a joke to the camera how the other ladies were lucky she even put a bra on.

So far, Denise has been Switzerland regarding PuppyGate and kept her opinions of her co-star on the positive side. That changed a bit during her recent appearance on Sirius XM’s Lunch with Bruce radio talk show.

Denise said that while she strives to be herself on the show because “I’m not trying to pretend to be a character that I’m playing.” She went on to say that some of her co-stars on the show aren’t quite as open on-camera as they are off-camera.

Taking a moment… with a furry friend! Loooved last night! Thank you to everybody who came to @VanderpumpVegas to support.

Without naming names, Denise said, “There’s a couple, I’m going to keep my mouth shut [about] who, who are a little different off-camera and on-camera.” She further clarified that “It’s not that they aren’t nice, it’s that they are not themselves. There’s a bit of a wall and I think there would be things that would be said if it were real life.”

She revealed that when she had met these unnamed ladies off-screen, their behavior was very different than how they act on-camera. Given that Denise already knew and was friends with Lisa Rinna and Kyle Richards, she’s most likely talking about Teddi Arroyave, Dorit Kemsley or Lisa Vanderpump.

It’s well-known by fans that Lisa Vanderpump is stoic and aloof on camera. Perhaps she is one of those who put up a wall.

Fans who keep up on Hollywood gossip know that Denise had a lot of drama with ex-husband Charlie Sheen. That’s why it’s a bit of a surprise to find out that he was invited to her wedding and she’s spoken to him on the phone on-camera.

It seems they have a cordial relationship after years of turmoil. Their relationship is so solid now, Denise asked Charlie for his opinion before joining the show. While discussing it on the radio show, she does say she would have joined no matter what he said. They do share children together.

However, according to Denise, Charlie said, ‘I think it could be really cool.’” Her two children with Charlie, 15-year-old Sam, and 13-year-old Lola make frequent appearances on the show and Denise most likely needed his permission for them to appear. Even so, they all seem to get along very well these days.

Denise also has a 7-year-old daughter, Eloise, whom she adopted on her own several years ago. Her now-husband, Aaron Phypers, is a great stepdad to Denise’s three children. In fact, he was on dad duty when Denise went on the girl’s trip to the Bahamas with the other ladies of RHOBH.

Netflix Debuts Sitcom ‘Pretty Smart’: Release Date, What We Know So Far
Carlin Bates DRAGGED For Making Everything About Herself
‘RHONY’ Season 13 Reunion Canceled: What Does This Mean For The Show?
Kendall Jenner On Her Hands And Knees At Met Gala
‘MBFFL’: When Will Whitney Way Thore’s Mystery Man Reveal Himself?