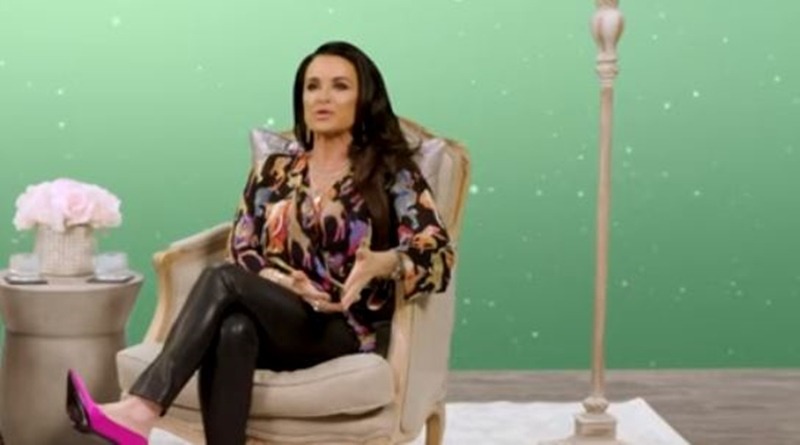 RHOBH continues to bring bust-ups, high emotion, and drama. In fact, fans of Lisa Vanderpump wonder if she’ll do another season of the Bravo show. In the latest episode of the show, Kyle Richards’ meltdown with Dorit Kemsley came after PK’s “joke” at the Boy George show. Teddi Mellencamp got involved, and everyone ended up yelling about Lisa Vanderpump. It’s hardly any wonder that Lisa may want out of the drama.

The RHOBH cast went off to a Boy George show and thanks to Dorit, they got backstage. The fun of the concert soon evaporated though. It came when PK said something that he insists was an English joke. However, Kyle certainly never saw any funny side to it.  It came after Kyle Richards asked if Boy George ever worried about a “crazy fan” trying to get up onstage with him.

So, PK up and says that “Nobody thinks like that.” However, he then added that Kyle might have those issues though. He said, “You could have issues. You can’t even go home to your best friend, so you could have issues.” Of course, everyone was a shocked and taken aback, so PK was quick to point out it was just “a joke! An English joke…not an American joke.”

The comment that Kyle can’t go to the home of her best friend certainly hit the hot-button with Kyle. She gave it straight back to PK, pointing out that Lisas’s not talking to him either. However, adding some fuel to the fire, PK said he talks to Lisa’s husband Ken and they’re “still on good terms.” Kyle looked like she swallowed a lobster boiling in its pot and went off at him. Angry, she told him she’s been “defending him” over the whole Puppy Gate thing.

Anyway, PK denies he’s in the same boat as Kyle with Ken and Lisa. Dorit tries to salvage the day but fails. Kyle rushes off with the pack in full pursuit. Meanwhile, Dorit explains to PK that his joke’s no joke and he should say “sorry.” Meanwhile, PK couldn’t get that maybe he shouldn’t make sensitive jokes to women he’s not too familiar with. He said, “Yeah, but I don’t need to know them. I made a joke!”

Kyle carries the RHOBH meltdown over to Dorit Kemsley

Meanwhile, fans of RHOBH saw Kyle steaming through her ears, saying that it’s all the fault of Dorit and her dog. However, Dorit tries to calm her down, saying PK didn’t mean it the way she took it, and he “loves” her. Anyway, Teddi Mellencamp has something to say about Lisa and Ken being okay with PK. After some bickering, Kyle turns on Dorit in a fury. That came when she said Kyle argued with Lisa, but it’s not her fault and got “nothing to do” with her and PK.

Thoroughly furious, Kyle yelled at Dorit, “Dorit, you’re 100 percent wrong!” She added that if it has been an issue just between her and Lisa, she “could have just defended her blindly.” She says she would not do that because she “cares about” PK and Dorit. Then she says she really couldn’t do that because she had to “f**king be honest.”

RHOBH drama really got everyone seething at the Boy George concert. Between PK’s joke and Kyle’s meltdown on Dorit, it looks like Lisa’s not the only one Kyle’s angry at these days. Is Kyle Richard losing more friends? Sure looks like it. What do you think about Dorit and PK thinking Kyles Richards’ big bust-up with Lisa had nothing to do with them? Do you get why Kyle’s so angry, that she had a meltdown? Sound off your thoughts in the comments below.

Viewers Are Here For ‘Thicc B*tch’ Corey Of ‘Too Large’
‘LPBW’ Did Zach And Tori Roloff Actually Move To The Farm?
Karen Derrico Meets Donor Family That Saved Her Daughter’s Life
Courtney Waldrop Calls Out The Booger Picker – Who Is It?
Netflix’s ‘LA’s Finest’ Season 3: Renewed Or Canceled?