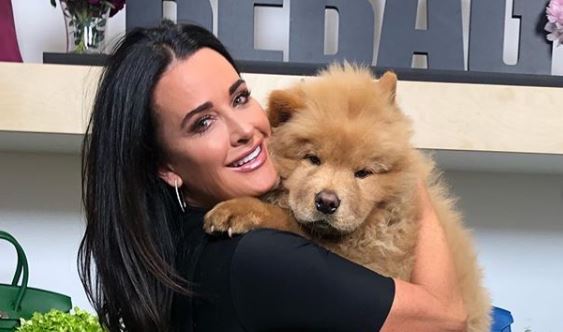 Fans of Real Housewives of Beverly Hills have been waiting for months to see the argument that ended Lisa Vanderpump’s friendship with longtime ally Kyle Richards. Both ladies have been doing interviews in which they proclaim their friendship is over. This season’s trailer showed a few snippets of an argument between Lisa and Kyle that ended in Lisa’s husband, Ken Todd, kicking Kyle out of the home he shares with Lisa.

What went down this week?

The episode that revealed more details about the drama finally aired this week on Bravo. During lunch with the other co-stars, Kyle was asked if she thought Lisa V. could have leaked the Puppygate story to online outlets. If you missed out, Dorit Kemsley adopted a dog from Vanderpump dogs. The dog somehow ended up relinquished to kill shelter. It should have been returned to the dog rescue as the contract Dorit signed stipulates.

Kyle and co-star Teddi Mellencamp Arroyave were informed by the Vanderpump dog staff about the drama surrounding the dog, Lucy Lucy Apple Juicy. The other co-stars, Lisa Rinna, Erika Girardi and newcomer Denise Richards, heard bits and piece of the story from various sources. Lisa Rinna convinced the other ladies that Lisa V. purposely had her staff leak the story to Teddi and Kyle. She thought it was to punish Dorit while keeping herself out of the situation.

Kyle Richard’s shares her side of things

During the lunch with the other ladies, Kyle Richards admitted that Vanderpump could very well have planted the story. Defending her decision not to deny Lisa V.’s possible involvement, Kyle wrote on her Bravo blog that, “I grappled with taking the easy way out OR telling the truth. I am not a liar.”

After lunch, Kyle went to Lisa’s house to discuss the Puppygate situation.  Lisa V. denied leaking the story, saying she’d already spoken to TMZ about it, so why would she leak to another outlet?

The conversation quickly turned into a screaming match between the besties. Lisa’s husband Ken was present during the argument. Ken has also been involved in Puppygate, presenting text printouts to Lisa from the Vanderpump Dog staff that showed Teddi’s role in the drama.

The argument caused Ken to tell Kyle that the friendship between the three of them was over. It ended with him kicking Kyle out of the house. In her blog, Kyle said she was astounded by their reaction. She explained saying, “As soon as I brought up the conversation and what was said, Lisa and then Ken went from zero to 100. Their reaction was so extreme it shocked me.” This relationship really seemed like one that was unbreakable.

It’s still to be determined if Lisa Vanderpump’s friendship with Kyle can be repaired. However, Erika recently told E! News that filming is more fun without a certain person. She is talking about Lisa. She refused to film with the rest of the ladies for the last half of the season. The reunion should be fun if Lisa even shows up. At least the entire season can’t be about Puppygate if Lisa didn’t film.

Real Housewives of Beverly Hills airs on Tuesdays on Bravo. You do not want to miss the rest of this season.