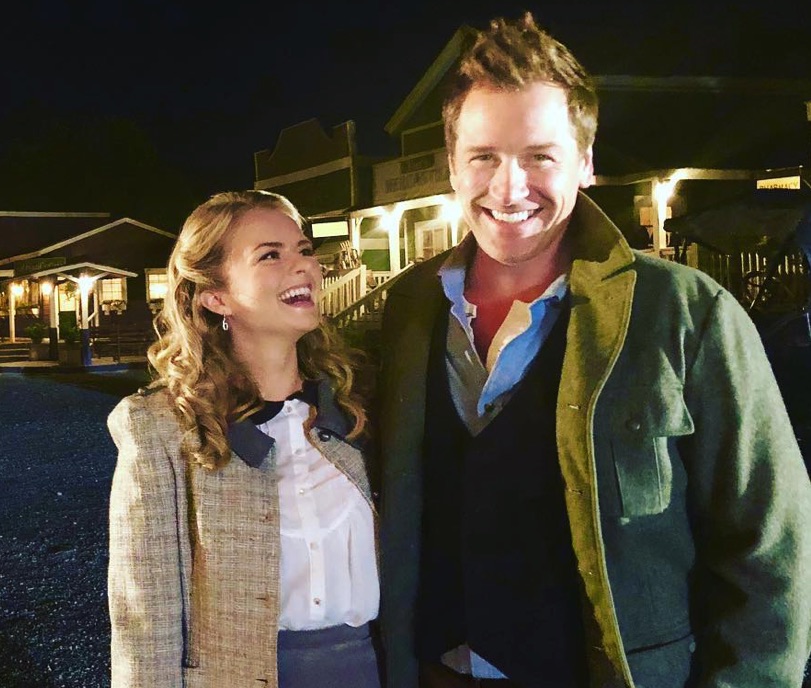 Hearties have been reeling from the shocking news of Lori Loughlin’s firing from When Calls The Heart. Then the show’s producers announced that they are temporarily taking the show off of the air,  for some “retooling.” Fans have been concerned about the fat of the show and the long period of silence from Hallmark. So, the messages from a couple of WCTH stars is some positive news, during a very difficult time for Lori Loughlin’s former costars and the devoted fans of Hallmark’s number one show.

On Instagram, Paul Greene thanked #Hearties for the love and support they have given the Hallmark show. Paul, who portrays Carson Shepherd on WCTH, has been a fan favorite on Hallmark for many years, on this show and on many individual romantic movies. Without mentioning Lori Loughlin, nor the college admissions scandal that led to her firing, he focused on the fans who have given him so much love. He assured #Hearties that the show will be back “soon.”

“There has been such an outpouring of love and support for the show and it’s cast. Rest assured we will be back in hope valley soon. #hearties ❤️”

There has been such an outpouring of love and support for the show and it’s cast. Rest assured we will be back in hope valley soon. #hearties ❤️

Andreas Brooks, who happens to play Faith Cater, Carson Shepherd’s possible love interest, also went to social media to thank fans. She made sure to thank the #Hearties that shared their love and support to continue this show. Andrea expressed her gratitude on being on this show and the entire WCTH “family.”

“Hi #Hearties, I just wanted to take a moment to tell you that I appreciate the tremendous outpouring of love and support over the past week. Your kindness and dedication does not go unnoticed. I love being a part of this family. Thank you. ❤️”

Andrea posted on social media about 14 hours before Paul Greene. Was it a coordinated effort to thank fans and reassure them the show was continuing?

Hi #Hearties, I just wanted to take a moment to tell you that I appreciate the tremendous outpouring of love and support over the past week. Your kindness and dedication does not go unnoticed. I love being a part of this family. Thank you. ❤️ #WCTH #WhenCallsTheHeart @hallmarkchannel

What Is Next For When Calls The Heart?

So far, the other WCTH costars have been silent, except for Eva Bourne, who also did double duty with Lori in Hope Valley and on Garage Sale Mystery. Eva thanked the fans and crew of that canceled Hallmark show. But what about When Calls The Heart? Could it also be canceled?

As TV Shows Ace previously reported, the producers of WCTH have gone to social media and assured #Hearties that “the show has not been canceled.” They assure fans that “Hope Valley will return soon.” They are currently “retooling” the beloved show, but have not given any details on what this means. It is safe to assume that Lori Loughlin will not be seen on any unaired episodes of Season 6, but it is not clear if a new actress is replacing her, or if they killed her character off screen.

Clearly, the cast and crew of WCTH were shocked by the events that led to Lori’s firing. The Hallmark producer’s statement revealed, “As you can imagine, everyone involved with When Calls The Heart was surprised by these developments,” plainly showing that they had no idea that this sort of thing could rock their show.

As we wait for #WCTH S6 to return, remember you can always head to #HopeValley with SC on Demand! ❤️See every season and episode so far, any time you like. 📺And if your cable provider is missing episodes, let us know so we can help! 🇨🇦#Hearties pic.twitter.com/Mfc07DuGk3

When Will #Hearties Expect To See The Rest of When Calls The Heart Season 6?

Meanwhile, fans who feel that they need the comfort of Hope Valley can watch the show with Super Channel Heart & Home on Demand. They are even willing to go the extra mile and help out #Hearties whose cable providers are missing episodes.

Do you appreciate Paul Greene and Andrea Brooks reaching out to #Hearties on social media? Are you hopeful that When Calls The Heart will be back on the air soon? Do you think Hallmark has assured fans that they will keep the show running? #Hearties, please share your comments and feelings below. Stay tuned to TV Shows Ace for the latest in When Calls The Heart news.