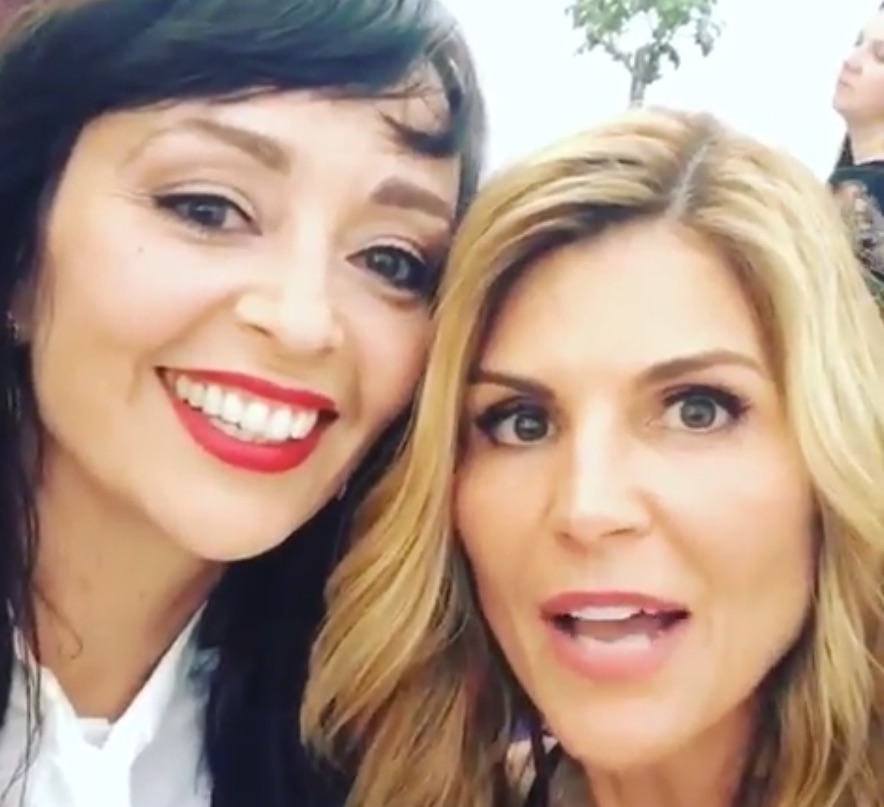 On Friday, Garage Sale Mystery star Sarah Strange posted a #tbt photo of her and her daughter from the first Garage Sale Mystery. She revealed that the Hallmark Movies & Mysteries fan favorite show was indeed canceled. The show appears to be have been canceled just one day after Lori Loughlin was fired from all Hallmark productions. Sarah Strange revealed on Instagram that she was “bereft,” as she thanked the crew, cast and the fans of the now canceled show.

“#tbt to the very first Garage Sale Mystery.
Our show was canceled today and I am bereft. To the crew: you people are brilliant. I thank you for your grit and grace, your skill and good humour, your patience with us and with each other. I love you very much. To the cast: I love you awesome nerds! It was more fun than anything playing make believe with you. Thank you. And to our fans who follow me who are hurting and in shock, I am so, so sorry. Thank you for watching. Thank you for being so lovely. It was a pleasure to make these movies for you for the last 6 years. I’m holding you tight. 💔💔💔”

Strange did not mention her co-star, or the reason for the cancellation. The talented actress delightfully played the quirky Dani (Danielle), who co-owned Rags to Riches, along with her non-nonsense business partner, Jennifer Shannon (Lori Loughlin). Dani was always trying over-the-top healthy foods, new age trends and desperately trying to meet the man of her dreams. Most of the time, she wound up dating the killer! Of course, Dani was sleuthing along with Jennifer, as a lot of times the mysteries started out with products that Rags to Riches found at garage sales.

Perhaps one of the biggest shockers to Garage Sale Mystery fans is that they only had another week to complete filming Garage Sale Mystery: Three Little Murders. According to Straight, they began filming the latest mystery in Vancouver, on March 4, and were set to complete filming by March 21. Unlike Loughlin’s other series, When Calls The Heart, where Hallmark has pulled the series, but will not cancel, they just pulled the plug on this mystery, uncompleted. Fans are so upset that they have created a change.org petition requesting that Hallmark keep the series.

In previous years, they filmed four episodes straight. Filming would end in June, then Hallmark made August Garage Sale Mystery month. This is a major blow to everyone involved in these entertaining mystery movies, including crew, actors and those who live in the Fort Langley area near Vancouver. Most likely, they lost several months of pay, and this will be hard to replace. Mostly locals worked on these movies and after 16 movies, they had a regular crew.

To the large group of strong, competent, beautiful women in my life, I am very grateful. @LoriLoughlin being one of them. She's had my back since day one, I owe a lot to this gal! To all the important women in my life–a big shout out today! #internationalwomensday #powerfulwomen pic.twitter.com/H0HxMCX4sk

What Could Replace Garage Sale Mystery?

As of now, Hallmark did not choose to replace Lori Loughlin in Garage Sale Mystery. They chose to cancel the series altogether. What could replace this show on the channel? Allison Sweeney has started the Chronicle Mysteries, but her Murder She Baked series has been put on hold indefinitely. Perhaps Hallmark will consider reviving that series? Brook Shields and the Flower Shop Mysteries are fan favorites. Hallmark could win over a lot of fans by filming another trio of episodes.

The Gourmet Detective series starring Brooke Burns and Dylan Neal halted after four episodes. Neal explained it was in order for Hallmark to concentrate on their latest mysteries. Perhaps they will resurrect that wonderful series, as Burns and Neal had such great chemistry. Then again, Hallmark could certainly come up with a new series that could include Sarah Strange, and the other talented cast of Garage Sale Mystery. The ultimate show would be reuniting cast and crew. They did not deserve this outcome.

What do you think Hallmark should do to replace Garage Sale Mystery? What are your feelings about the cancelation Please share your opinions and thoughts in the comment fields below.