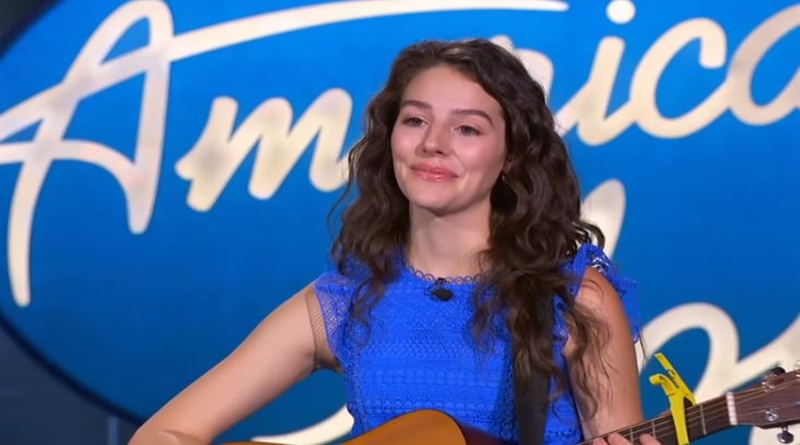 American Idol judges say 90 Day Fiance alum’ Evelyn Cormier has something special. Her segment aired on ABC’s show Sunday night, and she made it through to the Top 14. That means a golden ticket to Hollywood for the ready-made celebrity. Actually, she already made her own music with the EP Ghost, and her music streams on Spotify, Deezer, and YouTube.

Evelyn Cormier seemed very confident as she walked into her audition, and told Katy Perry that she’s just 19-years-old. Lionel Richie noticed her wedding ring, and Evelyn explained she had her first wedding anniversary a week before. While nobody mentioned her stint on 90 Day Fiance, obviously a built-in fan base won’t hinder her new push for stardom.

Listening to her audition, her voice does carry something different from the run-of-the-mill. As the judges said, she does something with her voice. Her voice comes over as kind of ‘breathy’ and that’s interesting. Actually, Katy said that Evelyn’s got her “favorite voice ever.” Used to cameras, Evelyn managed to carry a lot of confidence into her audition. You can see her audition in the video below.

The judges like Evelyn Cormier enough to send her to the Top 14 and some fans on YouTube think she’s good too. However, there’s no fire lighting them up. Here are a few comments from them

For those who don’t know, Evelyn Cormier met her American man in Colombia. Business Times reminds us that she met Justin “during a rugby match.” Later, that led to her applying for her K-1 visa. During her time with the second season of 90 Day Fiance, fans of the show followed their journey. Actually, she often talked about her musical ambitions during the show. The couple married and stayed together, marking a successful notch in TLC’s show. This time around, she hopes to use Idol as a boost to her music career.

What did you think of Evelyn Cormier’s voice? Do you think it’s the best voice ever? Have your say in the comments below.

Remember to stay in touch with TV Shows Ace for more news about 90 Day Fiance and American Idol.

The Young and the Restless Spoilers, May 17-21: Moments of Truth For Chloe And Kyle
Why Is Tammy Slaton ALWAYS Wearing The Same Mask On Her Chin?!
Did ’19 Kids And Counting’ Get Pulled On Amazon & Apple?
Colton Underwood Reveals Details About Netflix Show In New Interview
Wait, Did Jim Bob Duggar Fire A Cameraman Who Fell In Love With Jana?