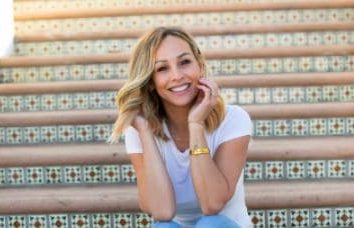 Clare Crawley and Dale Moss had a whirlwind romance. She only had eyes for him on her season of The Bachelorette and left with him. They were engaged and gone. This gave Tayshia Adams her shot to find the one. Dale and Clare split for a little while but got back together, becoming social media darlings once more.

In the past week thanks to a rumor about a girl on BIP with a “good girl edit,” hooking up with a previous winner, Bachelor nation has been abuzz. When Clare shared a message about her split from Dale on Instagram, she tagged Abigail Heringer. Currently, Abigail’s time on BIP is airing and she is attached to Noah Erb. Several fans think if a hookup happened between them it was while Clare and Dale were apart and before Bachelor in Paradise.

Why Did Clare Crawley Cut Dale Moss Off?

When Clare Crawley posted the message about her relationship, she and Dale still followed each other. She said, “I’m choosing not to speak right now on the details of my relationship because at the end of the day anyone can put on an ACT or throw words together to form any narrative they want.” She went on to say she is dealing with her mother’s health issues and recovering from her surgery.

According to US Weekly, Clare has unfollowed her ex now on Instagram. He still follows her and she hasn’t removed any of the pictures. An insider said, “They have different visions and wedding planning wasn’t happening which made Clare upset.” Abigail is no longer tagged in the post, but it was strange and got tongues wagging.

The only time people know they were at the same place was when several Bachelor stars were invited to the US Open. For his part, Dale attended an event with Tyler Cameron and seemed to be in “good spirits.”

She Thanked Her True Supporters

Clare Crawley seemed to call out fake friends in her post as well. She said she was thankful for those who offered love with no personal gain. Going on she said they “Stand by me through thick and thin. ESPECIALLY WHERE THE CAMERAS ARE OFF.” This is likely not the last we’ll hear of this saga, especially after Paradise wraps.

People showed their support. Actress Jennifer Love Hewitt said, “I’m so sorry mama. Sending you all my love and support. Here for anything you need.”

Sarah Herron said, “Clare, I’m so sorry you’re carrying so much right now. I’m praying for your mom. I will call you soon.”