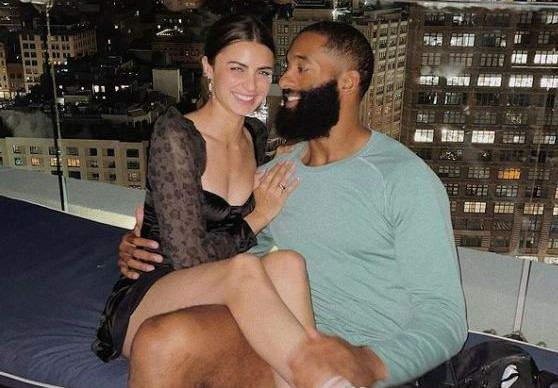 It’s seemed pretty obvious to Bachelor Nation that Matt James and Rachael Kirkconnell are back together. In fact, they have been showing more of a glimpse into their personal lives lately on social media. However, some must believe the two were not really going full public with their rekindled love. Now, after making a red carpet debut at the ESPY awards, Matt fires back at one unlikely critic.

Former Bachelor Matt James made a red carpet debut with his girlfriend and final rose winner, Rachael Kirkconnell. The two stepped out to attend the ESPY awards. Both looked glamorous and in love as they posed for media shots. News outlets everywhere shared news of their public debut.

Fans are happy to see Matt and Rachael working things out. However, it appears some feel the two have been somewhat hiding their relationship. One unlikely critic is actually Bachelor creator Mike Fleiss. US Weekly shared all about what went down on Twitter involving Fleiss and Matt James.

Fleiss retweeted an article by TMZ that indicated Matt and Rachael were stepping out of hiding to attend the prominent awards banquet. Along with the article Fleiss said, “Matt James and Rachael Kirkconnell Come out of Hiding at ESPY Awards.”

Matt took this opportunity to jokingly reply while also getting his point across. He replied to the Fleiss tweet with a fun photo of himself and Rachael peeking out from behind sunglasses. Matt said, “Ain’t nobody hiding!”

Matt chose Rachael to give his final rose to during his season of The Bachelor. The two started out on a rocky path due to allegations Rachael had exhibited racist actions in the past. Matt voiced being extremely disappointed in Rachael and said he wasn’t going to be dating her.

However, this apparently wasn’t completely true. Matt and Rachael reportedly continued talking after the scandal broke and they broke up. Both still had feelings for one another. Ultimately, the couple decided they loved each other enough to work through their issues. Rachael has vowed to become more educated about racism and be more understanding.

She’s living up to her statements. She and Matt are happy and enjoying their time together.

Of course, things didn’t end so well for now-former host Chris Harrison. He was paid a significant amount of money to exit the series for good. Things went south for Harrison after he defended Rachael in regards to her past actions.

What do you think about Matt and Rachael’s red carpet debut?

Ashley Iaconetti Of ‘BIP’ Shared What Scared Her Early In Pregnancy
Tayshia Adams & Zac Clark Commemorate 365 Days
Here’s Why Jinger Vuolo’s New Profile Picture Has Everyone Freaking Out
Oh No! What Has Hazel Busby So Upset In This Heartbreaking Photo?!
‘Love Island USA’: The SHOCKING Reason Leslie Left The Villa