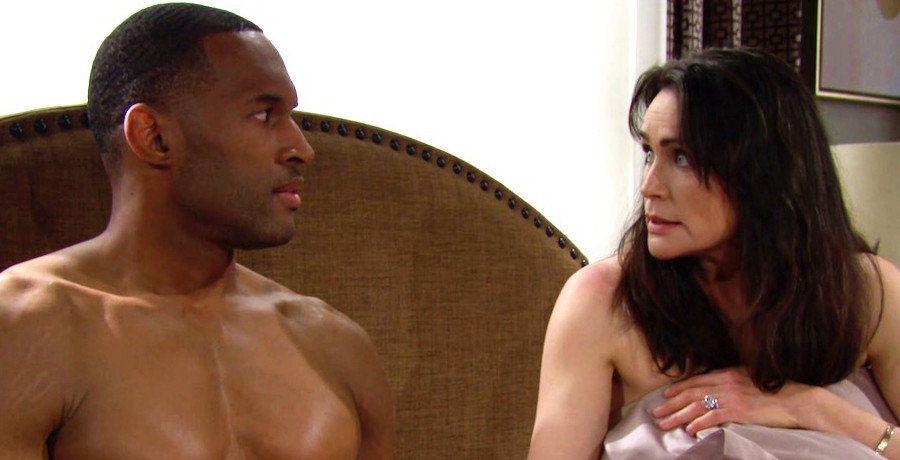 The Bold and the Beautiful spoilers reveal that Quinn Forrester (Rena Sofer) and Carter Walton (Lawrence Saint-Victor) will heat up our screens yet again. Earlier this week, Quinn’s world came crashing down around her. Everything that she worked so hard for is no longer hers. Brooke Logan (Katherine Kelly Lang) ruined Quinn and Eric Forrester’s (John McCook) vow renewal ceremony.

She overheard Paris Buckingham (Diamond White) speaking to Quinn about her affair with Carter. Brooke couldn’t believe her ears. She knew she had to get back at her archenemy. She took that shocking information and ran with it. Brooke spilled the beans to Eric Forrester, in front of everyone.

Eric threw Quinn out of his mansion, right in front of everyone. Where will Quinn go? Will she stay with her friend Shauna Fulton (Denise Richards)? Or, will she end up back in Carter’s bed?

Bold and Beautiful spoilers: Quinn and Carter heat up

It looks like Carter is hard to resist. It’s hard not to see why. He’s tall, muscular, and handsome. Carter is the type of man that any woman would be lucky to have. He even had Zoe Buckingham (Kiara Barnes) chasing him around for the past few months. Now that she found out that her best friend betrayed her, she left town.

Zoe’s last appearance aired on Tuesday, July 6. Soap Opera Digest revealed in the latest Bold and Beautiful spoilers for the week of July 17th that Carter will find himself back in Quinn’s arms. It makes sense since they’re both without the loves of their life. Once again, Carter will feel lonesome without Zoe around. As for Quinn, she has nowhere to go but to Carter’s bed.

Of course, there’s a catch. The hot duo won’t be able to do what they want to do. The Bold and Beautiful spoilers also hinted that Carter will have to meet certain conditions since he still works for Eric. Talk about an awkward situation. Will Carter lose his job because he had an affair with Eric’s wife? Or, will he have to stop seeing Quinn on the account that he keeps his job?

As for Quinn, she might be met with a dilemma herself. She will probably fight to get Eric back. After all, she’s a social climber who successfully worked her way in. Quinn’s lust for Carter might not last long since money talks. She might also have a fight on her hands if Eric’s ex-wife Donna Logan (Carrie Mitchum) makes the moves on him again. All it takes is a little honey…