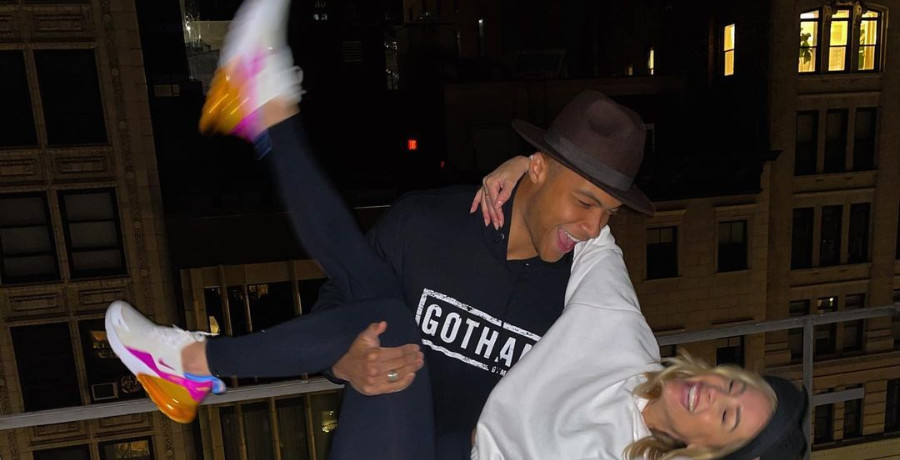 Moving in together?? While focus is on Clare Crawley’s health issues, she made a huge cross-country move. Is she living with her fiance Dale Moss? Inside her social media activity.

Clare Crawley felt an immediate connection with Dale Moss. He was a contestant on her season of The Bachelorette. Their bond was so strong that Clare broke things off with her other suitors and left the show with Dale. But it wasn’t an immediate happily ever after.

A few months later, Dale Moss publicly announced on his social media that they broke up. That was news to Clare! She didn’t expect him to announce it, thinking they were still working on their relationship.

The breakup didn’t last long. They were spotted together a month or two later. By April, Clare was sporting her engagement ring again. Check out her not-so-subtly showing off her bling.

While Clare Crawley has been working on her relationship, she’s also been battling health issues. She spoke out on her Instagram about why she’s getting her breast implants taken out. According to Clare, she hasn’t been feeling well for years. After multiple tests came back negative, her doctors have pinpointed the implants as the likely culprit.

Dale Moss took to his own social media to praise Clare for speaking out.

Now that their relationship is back on solid ground, it’s time to cement it. Clare Crawley is moving in with Dale Moss! The former model lives in New York City. The couple had been in a long-distance relationship, with Clare living on the west coast.

It’s a big move for Clare because her mother lives in a care facility due to Alzheimer’s. Dale Moss had been teasing a big move by sharing photos of moving boxes on his Instagram Stories.

Over the July 4th holiday weekend, Clare Crawley shared her destination. She popped out of a moving box with the text “What a difference a year makes. New York City, NY.”

In another slide, she shared that her journey as The Bachelorette started exactly one year ago this month.

Clare has visited NYC several times, including one touristy trip to The Vessel in Hudson Yards.

It seems Dale Moss is happy to have his fiance there. He shared a photo on his Instagram Stories of him and Clare wearing face masks for their nightly beauty routine.

Does it surprise you that Clare Crawley made a BIG move for love? Share your thoughts in the comments below.

Tune in to Katie Thurston’s season of The Bachelorette Mondays on ABC. You may recognize one of Katie’s suitors. Blake Moynes appeared on Clare Crawley AND Tayshia Adams’s season. Perhaps he’ll find love on his third try.