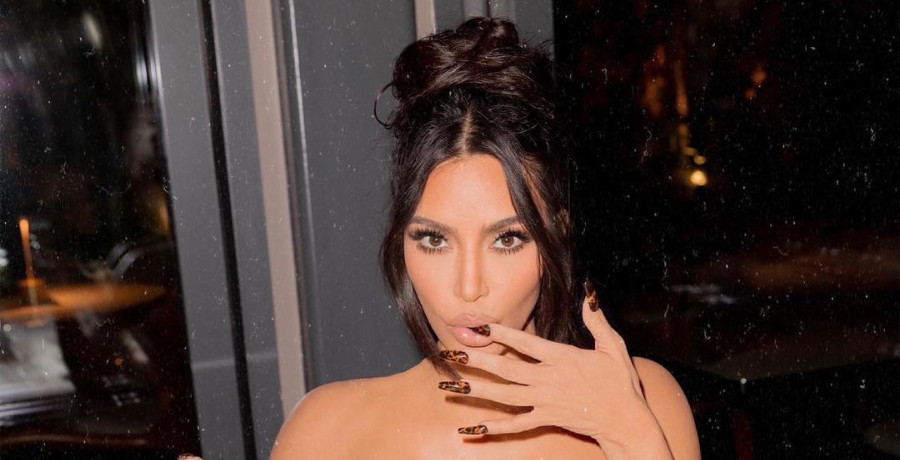 Armenian Reality Queen Kim Kardashian gave her followers whiplash on Instagram with her latest nude photo post. Now, fans are wondering, “Does Kim Kardashian actually sleep in the nude or  is this just a social media gimmick for views?

On Friday, Kim Kardashian won the internet with her latest social media posts. While the world is quite accustomed to seeking the celeb in skimpy, barely-there clothing – her nude photos tend to go viral in an instant. This one is no exception.

In her photo, Kim Kardashian sits, cross-legged on a bed completely nude. She is covered only by a snowy-white silk sheet. The 40-year old fashionista wore her trademark brunette locks down and flowing around her shoulders. The photo looks as if the celeb has just woken up. Her hair has that sultry ‘bed-head’ look. Surrounded by an ocean of luxurious bedding, the celeb locks eyes with the camera with a blank, doe-eyed stare. Her shoulders are bare and ample amounts of cleavage are visible above the top sheet that she holds in place with one, perfectly manicured hand.

Of course, as one would expect, Kim’s Italian boudoir bombshell photo exploded and in the 72 hours, since the photo went live, she has garnished more than 4.6 million likes and 33,000 comments.

For over a week, Kim K has been taking in the sights of Rome on a luxuration spur of the moment vacation. The SKIMS creator has been updating her fans on social media, showing off her Italian adventures, and of course, her vacation ensembles. Just last week, Kim posted a photo of herself visiting the Vatican museums. While she looked to be enjoying herself, this notable fashionable celeb got a lot of shade from followers for her outfit selection.

In the photo she posed inside one of the museums wearing an off-the-shoulder bodycon dress. The frock was made of sheer lace, hugged every curve and even had some ornate abdominal cutouts, showing off her taught tummy. Kim posed in front of a statue, wearing sunglasses, throwing peace signs and making the classic ‘duck lips’ face.

Unfortunately for Kim, this did not sit well with her followers.

Kim Kardashian’s choice of outfit for touring the Vatican and Sistine Chapel got many viewers panties in a twist. These attractions have a very specific, centuries old dresscode, that requires women to be covered.  Guests cannot wear sleeveless and/or revealing garments. Neither are hats and shorts above the knee.  According to The Mirror, the celeb she wore a long sleeve coat over the dress during the tour. Despite her attempt to “cover up,” those commenting on the photo were quick to throw shade. Fans seemed ‘unimpressed’ by what they perceived as a ‘lack of respect’ for the Vatican’s traditions.

The fact that she was allowed to take photos struck a nerve with fans. The main rule for tourists, beyond dresscode, is no photography. Flashes and camera lights damage the art and these are centuries old masterpieces.  Kim however had managed to find a secluded corner for her personal photo shoot. Fans did not hold back on their disdain for her nonchalantly breaking rules. 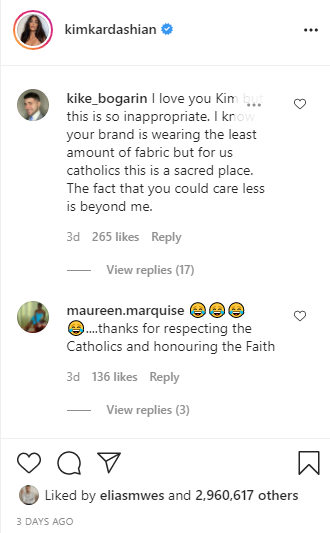 “Rich is no excuse for disrespect,” One commenter scorned. “she wants to be tacky and vulgar she could do that somewhere else but not the Vatican she obviously has no respect whatsoever,” added another angry follower.

Do Fan’s Prefer Kim When She’s in the Buff?

While Kim Kardashian thought she was creating a luxurious photo op, she was really setting herself up for a lot of shade. Her Vatican tour photos received thousands of comments – most of which weren’t complimentary. Needless to say, Kim had to save face, right? So Kim Kardashian dug deep and did what she does best. She got naked.

On the flip side, the photo of a fresh-faced, bare-bodied, silk sheet-draped Kim from hours before – got twice as many comments as her Vatican snaps, and nearly double the likes as well. Additionally, while pics of her exploring the city raked in the disdain and judgement from fans – a photo of her sitting nude covered by a sheet garnered their love and adoration. Tens of thousands of comments filled with hearts and fire emojis – for doing nothing but sitting in her own skin.

Unfortunately, it seems like fans really love Kim Kardashian – but only when she sits pretty with her mouth shut… and preferably unclothed. Does Kim Kardashian sleep nude? eh, maybe. Maybe not. Either way, she’s happy to set the scene to pretend she does.

Check out our homepage for all the latest updates on everything Kardashian. What do you think about Kim’s latest faux pas? Tell us on Twitter @TvShowsAce.