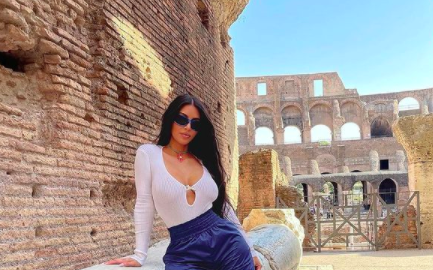 Kim Kardashian recently visited the Vatican, however, some are questioning her outfit. It seems she may not have followed the dress code.

Kim Kardashian at The Vatican

Kim Kardahsian had a private tour at the Vatican and people are really questioning her outfit choices. She sported an ivory and nude skin-tight dress. The dress shows off her shoulders and has several cuts in the middle showing off Kim’s lower stomach. These are known as ovary cutouts. Apparently, the Vatican has recently lifted some dress code rules, however, it still seems she may be out of line.

“Entry to the Vatican Museums, the Sistine Chapel, St. Peter’s Basilica and the Vatican Gardens is permitted only to appropriately dressed visitors. Sleeveless and / or low-cut garments, shorts above the knee, miniskirts and hats are not permitted,” the museum website reads.

Some have even said that plastic cloaks are for those not dressed right Yahoo!  says.

While Kim did not technically break any rules, her shoulders were showing and her dress was very tight. However, it doesn’t seem like the Keeping up with the Kardashians star got in trouble for her outfit choice.

Is Kim dating yet?

While Kim tours the world, fans wonder if she will ever get a boyfriend. After all, Kanye West is rumored to no longer be single. When will it be Kim’s turn?

Well, no surprise, Kim Kardashian is taking things slowly. In her relationship with Kanye, she really trusted him because they had been friends for so long before they dated. Now, she has to rebuild that trust with someone new.

“She also knows how hard it is to build trust with someone so she thinks it’s going to take time before letting someone into her private life. It was easy with Kanye because they were friends before so they had years’ worth of trust,” a source says.

Of course, Kim is also shocked that Kanye is moving on before she is.

“She certainly did not think that Kanye would move on with someone else before her. Friends and family are telling her she has nothing to worry about and when she’s ready to date again, they gladly will be setting her up with potential suitors,” the source reports.

Do you think Kim Kardashian should’ve dressed differently for her Vatican tour? Let us know in the comments below. Come back to TV Shows Ace for more news on all of your favorite Keeping up with the Kardashians stars.