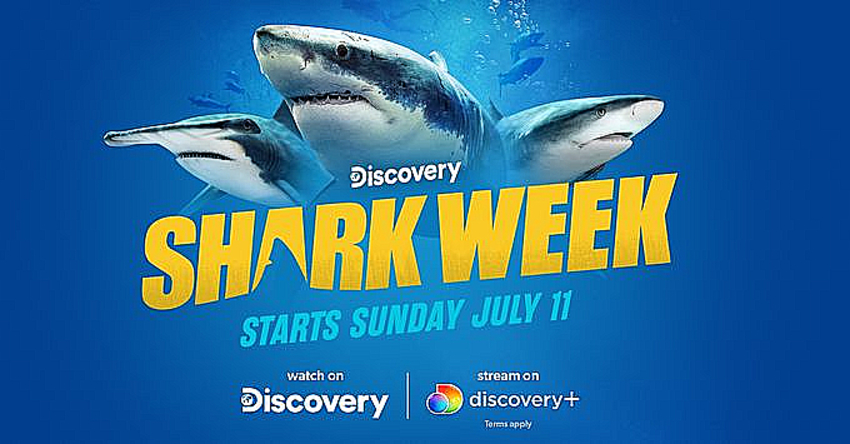 If you have been reading the news and paying attention, even the sharks know it’s Shark Week time for Discovery. Let’s be real; if you are swimming off Cape Cod or in Florida anywhere, you are flirting with danger as the sharks come closer to the breakers than anyone imagined.

Well, what did you expect? They live there. And you visit them in the warm weather when everyone wants to cool off in the beautiful water. Shark Week, now in its 33rd year, wants to educate you on how to approach the water safely, what to look for, and why sharks are a vital part of the ocean’s ecosystem and are to be respected.

What is Shark Week 2021 about this summer?

On television’s longest-running and most anticipated summer event, there will be 45 hours of shark programming, the most hours of programming in the event’s history.

New locales and mew experts, along with returning favorites, are taking viewers to see how they study and record new shark behaviors that have never been seen on camera before.  Shark Week has inspired kids for three decades to explore studies in marine sciences and make careers out of their love for sharks.

On July 1, Envoy: Shark Cull is narrated by Eric Bana as t follows the biggest names in ocean conservation as they reveal the importance of sharks in our oceans while uncovering the longest marine cull in history.

On July 13, Fin by Eli Roth will follow a professional group of scientists, researchers, and activists sail around the planet to find the truth behind the death of millions of sharks, exposing the criminal enterprise that impacts the extinction of the misunderstood creatures. This doc features the work of photographer Michael Muller and the support of organizations such as Oceana, Sea Shepherd, and WildAid. Oscar-winner Leonardo DiCaprio executive produces the film and actor, producer, and shark activist Nina Dobrev and President of Lionsgate Nonfiction Television and Pilgrim CEO and Chair Craig Piligian.

In addition, the first-ever shark series, Shark Academy, will premiere Sunday, July 11 on discovery+ and shark-themed episodes of Josh Gates Tonight will return Sunday, July 11, to highlight and explore some of the most exciting moments from Shark Week 2021.

What to expect? Some incredible brand-new, innovative shark research and compelling insight on some of the most remarkable shark species globally, including the first in utero tag in a pregnant Tiger shark, a potentially new Great White mating behavior, and the discovery of an elusive pupping ground.

Filmmakers have recorded some shark behaviors that have never been seen on camera before as well. For 2021 the producers of these specials for Shark Week take viewers to new locations to study new shark behaviors, including Bull shark hunting patterns and new heights – capturing the highest breach ever recorded as Discovery celebrates these brilliant creatures.

Check out SHARK WEEK 2021’s fincredible programming schedule below (all shows airing on Discovery will also be available on discovery+):

Internet sensation David Dobrik and his friends are on the craziest adventure yet. When faced with bad weather and sharks larger than they expected, these 20-somethings quickly find themselves asking, “Why did we go on Shark Week?”

Robert Irwin comes face to face with a Great White Shark for the ﬁrst time ever with shark conservationists Paul de Gelder and Madison Stewart. Following his father’s footsteps, he will get as close as possible to these incredible creatures to determine which apex predator reigns supreme – Crocs or Great Whites?

Johnny Knoxville sends Steve-O, Chris Pontius, and new Jackass cast members dial up a series of shark stunts that test their bravery and threshold of pain as they put common shark myths to the test with the help of Dr. Craig O’Connell.

Mark Rober and Noah Schnapp from Stranger Things explore abandoned undersea ruins and artificial reefs, searching for the strangest sharks in the ocean.

Narrated by Chris Rose, the Air Jaws team, Alison Towner, Dickie Chivell, Chris Fallows, and Enrico Gennari return to Seal Rock to capture the highest breach ever recorded. Rocket Shark holds the record at 15-feet. Will he return to jump even higher, or will a new shark take the World’s Highest Flying Great White Shark title?

Rumor has it that two of the largest sharks in existence have been recently roaming New Zealand waters. Brandon McMillan and Dickie Chivell are heading out to see which one is bigger, Phred or Slash?

Josh Gates links up with William Shatner to boldly go where Shark Week has never gone before. The mission: enter shark-infested waters to understand the nature of fear and come face to face with an apex predator.

In 2017 one of the strangest ocean mysteries occurred in South Africa when an entire Great White population disappeared overnight. Alison Towner and her team, Enrico Gennari and Andy Casagrande, head out on an epic investigation to find the missing Great Whites of Seal Island.

A team of scientists and shark experts, including Dr. James Sulikowski, Dr. Toby Daly-Engle, Dr. Neil Hammerschlag, and Jamin Martinelli, deploy an arsenal of new technology to find out how Tiger Sharks give birth. Still, they need to meet some of the Bahamas’ biggest tiger shark mothers face-to-face for it to work.

Country star Brad Paisley and comedian JB Smoove meet in the Bahamas to attract new fans, Sharks! With Dr. Austin Gallagher’s help, they put Brad’s musical talents to the test in shark-infested waters to see how sound can attract or repel sharks.

In 2012, Michelle Jewell documented one of the largest great white mating scars ever recorded. Recently similar marks have appeared, leading her to believe this is a possible mating ground and that mega-shark El Diablo has returned to South Africa.

The shark population in Turks and Caicos has loads of female tiger sharks, leaving scientists wondering where all the males are hiding. Shark enthusiast Kinga Philipps joins Dr. Austin Gallagher to help solve this puzzling mystery.

Researchers Kina Scollay, Mark Erdmann, and Al Baxter build a submersible mechanical shark to track down New Zealand’s monster great whites and pilot it deep into what they believe could be a mating ground.

Ian Ziering and Tara Reid pick up their chainsaws once again – this time with the help of Dr. Tristan Guttridge and to see if a real Sharknado could happen.

Return to Lair of the Great White – Airing Wednesday, July 14 at 10 PM ET/PT

Dr. Craig O’Connell and Marc Payne return to where they unexpectedly filmed a juvenile great white during a past mission. Believing there’s a nursery nearby, they follow the trail to a discovery that could change everything we know about great whites.

Bull sharks are Australia’s fiercest fish, but there has been a shift in their behavior concerning the human population. Paul De Gelder joins Johan Gustafson to uncover why these sharks are becoming more aggressive hunters.

Dr. Sandra Lee heads to Turks and Caicos with Dr. Austin Gallagher to explore the world of shark skin and how she can apply the science they gather to help human skin issues.

Snoop Dogg breaks down the craziest encounters, the wildest and most unpredictable reactions to discover if America is once again ground zero for the shark superstorm.

South African Great whites are on the brink of extinction. Alison Towner, Chris Fallows, Dickie Chivell, and Enrico Gennari will search and tag the last female great white mature enough to carry on the species.

International wildlife biologist Forrest Galante and Jessica Evans travel the world searching for rare and elusive wildlife, including those lost to science and mysterious cold-water sharks.

In Mexico is the El Demonio Negro, a 50-foot shark that has terrorized fisherman and tourists alike for generations. Is this an undiscovered predator? Forrest Galante hunts for answers in the most rugged and remote parts of the Baja Peninsula.

A monster lurks in the crystal blue waters off the coast of Costa Rica named Lagertha. In this epic adventure, Dr. Craig O’Connell, Vicky Vasquez, and Andy Casagrande team up to discover why the tiger sharks in this area are unexpectedly more aggressive.

As the Shark Vortex retreats in the fall, sharks battle it out for dominance in New England’s icy waters. Experts Dr. Greg Skomal, Joe, and Lauren Romeiro brave rough oceans and fierce predators to capture new footage and insight of the phantom shark and reveal which shark reigns supreme.

Discover everything that has happened in the world of sharks this year, including unbelievable viral videos, big news stories, and the latest in cutting-edge shark science.

I Was Prey: Shark Week 2021 recounts two horrific shark attacks told solely by the survivors who overcame life and death circumstances to tell their stories.

Dr. Tristan Guttridge and James Glancy travel to Andros Island to investigate reports of an exclusive population of giant hammerheads. They attempt one of the longest shark dives EVER – upwards of 10 hours – using an underwater habitat to get answers.

On Discovery’s TikTok, fans will be able to live-stream exclusive immersive experiences from SHARK WEEK stars to get a behind-the-scenes look. As a part of TikTok’s Instructive Accelerator Program, Discovery and Science Channel’s accounts will serve daily educational content about sharks and the importance of their conservation for our ocean’s ecosystem.

Drew teams up with Shark Week host and marine biologist Luke Tipple. Audiences will see what happens when the former WWE Champion has his first close encounter with sharks in one of the world’s largest single aquatic exhibits at the Georgia Aquarium. Tipple also returns to host The Daily Bite, a discovery+ original mid-form series with a companion podcast that takes fans behind the scenes.

Discovery gives fans a chance to win a shark dive for two from Islander Charters, a $10,000 cash prize, and more fintastic prizes. Enter daily now through August 2 at Discovery.com/SharkWeekSweepstakes.

Oceana and Discovery continue their longstanding partnership to help protect sharks, which are threatened by a global shark fin trade decimating so many shark species. The consumer demand for shark fins is the issue.

More importantly than ever, this year’s Shark Week collaborations with major brands and content creators help raise money for Oceana’s campaigns and educate fans about why sharks matter to us all.

This year Discovery is partnering with Beneath The Waves, an ocean NGO using cutting-edge science to advance scientific discovery and catalyze ocean policy, with initiatives focusing on conserving biodiversity and highly migratory species such as sharks.

These businesses are helping Discovery by supporting Shark Week and making fun products that will raise revenue to support these ecological initiatives. Please support them back:

Discovery’s marketing and returning partners include Southwest Airlines, Great Clips, Pooch Perks, and Georgetown Cupcake. New partnerships with Wilson, MLB, Casely, Me Undies, and Nautica will kick off in the weeks leading up to Shark Week 2021.