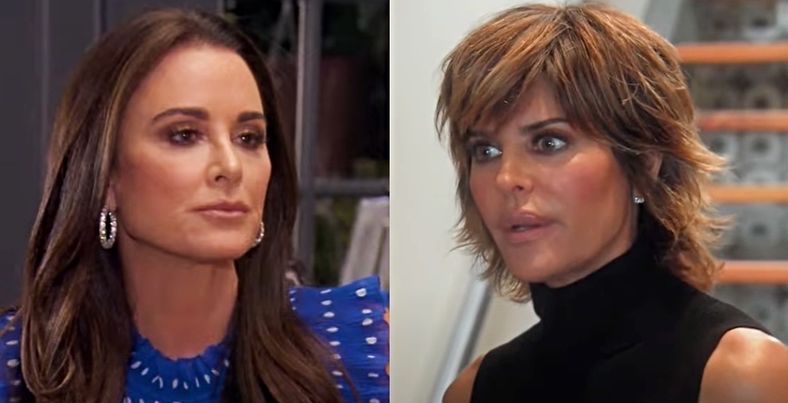 RHOBH stars Lisa Rinna and Kyle Richards were twinning on last night’s episode, and some Bravo fans wonder if it was planned. Fans took notice as the two housewives rocked the very same Rotate Birger Christensen black and white polka dot dress. But, was it intentional?

According to People Magazine, the twinning of Lisa Rinna and Kyle Richards on last night’s episode of The Real Housewives of Beverly Hills was NOT intentional. The two real housewives cast members arrived at Sutton Stracke’s house to attend the “Paris Party” while rocking identical dresses. Both ladies picked the dress because they each thought the dress perfectly matched the theme of the party. Twinning, however, was a happy accident.

Lisa Rinna took to Instagram shortly after the episode aired to address the twinning. She shared a few photos of herself and Kyle Richards rocking the same polka dot puff-sleeve frocks. She noted in the caption that the twinning was NOT planned. Turns out, they just have amazing and matching tastes when it comes to fashion.

Now, the duo did differ slightly in their accessory choices. Lisa Rinna paired her dress with a pair of gorgeous silver hoop earrings and white Bottega Veneta mules. Kyle Richards accessorized with red sandals, a wide-brim hat, and a matching clutch. Overall, the duo looked fierce in their matching dresses.

In the comments of Lisa’s Instagram, RHOBH fans were here for the twinning of Lisa Rinna and Kyle Richards. Many noted the duo looked “iconic.” Most agreed it was giving series Pretty Woman vibes. Some jested that the gorgeous pair of women outdid Sutton Stracke with their matching dresses. A few of Lisa’s Instagram followers even opted for arguing over which housewife wore the polka dot dress best.

Were you surprised to see Lisa Rinna and Kyle Richards twinning on last night’s episode? Who do you think wore the dress better? Share your thoughts with us in the comments section.