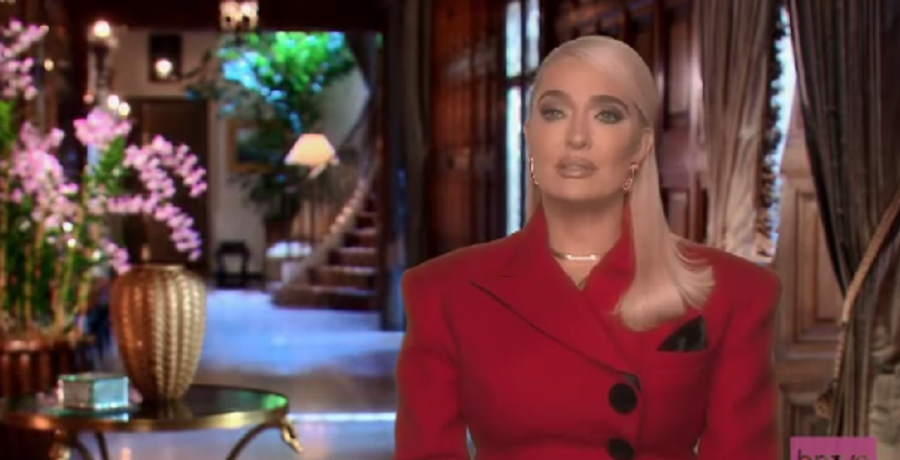 RHOBH fans want Erika Jayne to mention it all. However, she’s keeping quiet amid the debut of the new Hulu documentary, The Housewife and the Hustler. On Tuesday, June 15, the reality star took to Instagram to promote the latest episode of The Real Housewives of Beverly Hills. Meanwhile, fans have already tuned into the documentary and have lots to say.

The ABC News’ original made its debut on Monday, June 14. The documentary is about the lives of Erika Jayne and her estranged husband Tom Girardi. It shares never-before-seen footage of Tom’s disposition. Tom’s alleged victims and RHONJ alum Danielle Staub also make an appearance in the program, among many others.

Rather than speak out about The Housewife and the Hustler, Erika Jayne shared a sneak peek of the upcoming episode of The Real Housewives of Beverly Hills. The clip shows Kyle Richards having drama with Dorit Kemsley. Meanwhile, the ladies gathered together to talk about Erika’s divorce, which came as a shock to everyone. There is also plenty of fun with Garcelle Beauvais and Sutton Stracke going for a drive.

Erika Jayne makes a dramatic entrance as the ladies talk about her. She walks in a long red silk dress with her long platinum blonde hair parted in the center. She closes the door just as dramatically as she looks at them. Before Erika arrived, some of them admitted that the divorce came as a shock to them.

In her post, Erika simply wrote: “#RHOBH is all-new tomorrow at 8/7c on @BravoTV!” It sounds like she wants her fans to focus on the drama that’s happening on RHOBH Season 11 rather than on The Housewife and the Hustler. However, fans can’t stop buzzing about the documentary. Some have already had virtual watch parties across different platforms on social media like Reddit.

Of course, Erika Jayne got trolled once again. Some fans feel that she should talk about The Housewife and the Hustler rather than the next episode of The Real Housewives of Beverly Hills. However, she might not be able to speak out because of the ongoing legal case. Erika is remaining tight-lipped as she promises to mention it all on the Bravo series.

“So you’re just not gonna address the documentary?” one fan asked. “The Housewife and the Hustler on HULU,” another commented.

There were some users who wanted to know if Erika about Tom’s legal failings. In the documentary, it was alleged that his law firm, Girardi Keese law firm, stole money from his clients in an attempt to offer Erika a lavish lifestyle. RHOBH fans agree that the show does not look good for the couple.

The Real Housewives of Beverly Hills airs Wednesdays at 8 p.m. ET on Bravo. The Housewife and the Hustler is available for streaming on Hulu.