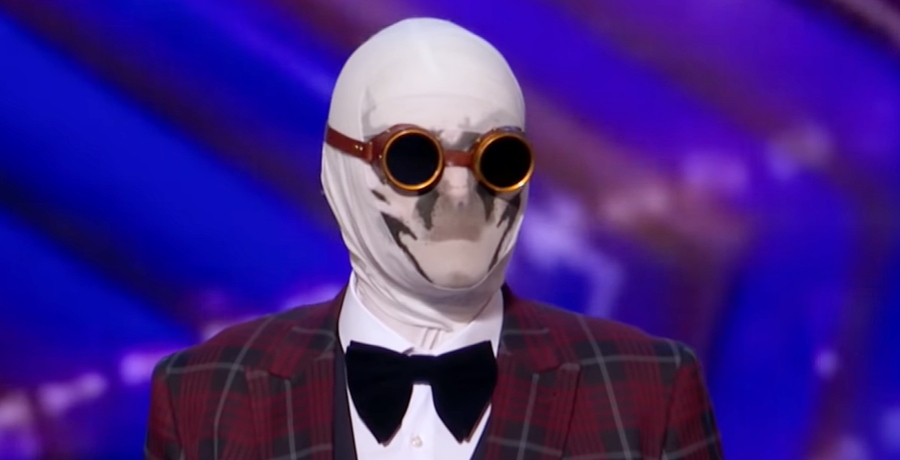 America’s Got Talent is a very entertaining show, and what’s more entertaining than a masked magician? The judges have been surprised by a few acts, as they get going with the new season. This new act definitely took them off guard when he arrived on stage.

Although Klek Entos isn’t just a normal masked magician, he’s creepy. In the third episode of AGT coming up, which fans got a sneak peek of, they were introduced to Klek. In the clip, he wowed the audience and the judges with a crazy act.

During the clip, Klek arrives with thunder and static on the screens getting attention immediately. He shows up and says, “he’s in control,” as he wields an ax.” Heidi Klum says hello, and he says nothing. Accompanied by eerie music, he puts a tape into a player and says, “I am the sum of all your fears.” He gives a creepy puppet from Saw mixed with an internet hacker group Anonymous vibe. Using fire and a tarantula, he terrified all the judges.

This Is Not The Masked Magician’s First Talent Show

According to Meaww, this isn’t the first time this masked magician has done this act. He also appeared on France’s Got Talent, a sister show of AGT. He made it to the finale and didn’t end up winning. Sources said he had stiff competition, but he’s going to have to step it up a bit this time around.

The act he performed is online already, so it will be interesting to see if he makes it to the next round if he does something different. Still, the combination of the music, the voice, the mask, and the spider was very spooky. Fans want to know what he looks like, but so far in his videos and on AGT, he didn’t reveal his face. As the masked singers and dancers in reality television have proven the added layer of mystery makes the act more entertaining.

Fans Thought He Was A Spooky Act As Well

Facebook fans agreed the masked magician is creepy. One said, “why does he look like a murderer?” Another said, “I watched it and he was scary. Fans on YouTube talked about how impressed they were. One said, “his stage presence is amazing.” Another said, “very commanding yet mysterious.” A third said, “I don’t normally like this kind of thing, but this was really good!”

All of the previous magic acts on the show have been funny or full of good cheer. This one is definitely a lot different.  AGT comes on Tuesday nights and is sure to have some exciting acts. What do you think of the masked magician? Comment with your thoughts down below.