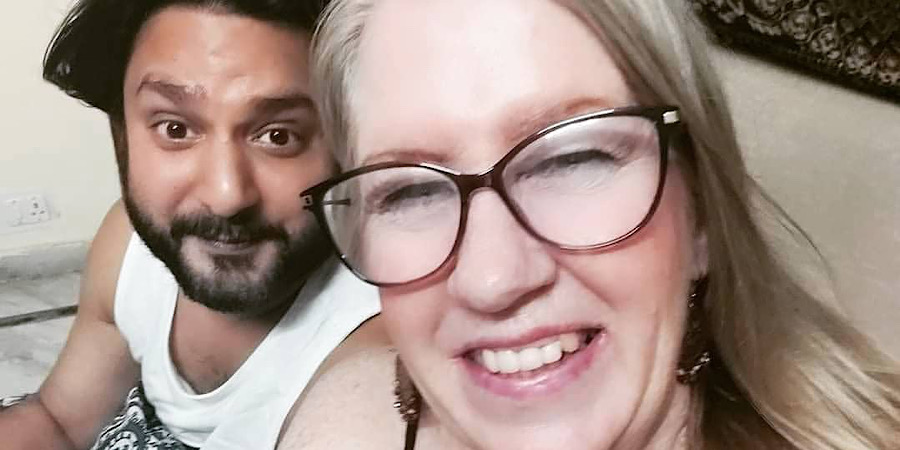 Fans are obsessed with the relationship status of Jenny Slatten and Sumit Singh. The 90 Day Fiance: The Other Way couple has kept fans guessing with many social media posts. Sumit has been seen wearing an elaborate ring on his wedding finger for some time. When fans broached the topic recently, Jenny played coy. Did the couple take their relationship to the next level? The signs are all there.

Jenny and Sumit have come a long way since they first appeared on the series two years ago. Prior to appearing on the show, they had a rough start. Sumit had initially catfished Jenny, posing as an English male model named Michael. They had a Facebook relationship for some time. Finally, Sumit realized he had fallen for the grandmother, thirty years his senior. This led him to confess his true identity.

Even after he shared he was a telemarketer from New Dheli who still lived at home, Jenny wanted to pursue something. She flew to India to meet Sumit, leaving behind everything for a love she had never met in person. He told his friends rather than his family he was going to marry Jenny. There was no way his parents would accept the marriage.

Somehow, despite his parent’s objections, the couple has succeeded. They are happily living together and Jenny is documenting their relationship along the way. This is why fans are starting to believe they may have tied the knot.

While nothing can be confirmed, one suspicion is they tied the knot to obtain a visa for Jenny. Jenny has also updated her social media to include a new collage of her and Sumit. But, it is really the blinged-out rings that have caught everyone’s attention. They do not look like engagement or promise rings at all. When fans questioned the couple, Jenny has played coy, saying they will have to wait and see.

This leads viewers to believe the couple is going to be on one of the many spin-offs. Or possibly their own discovery+ show. The current season of Happily Ever After? is still airing so if they were to be on the next season, it would not start until next year. Or it could just be the two enjoying life after their bout with COVID.

Both Jenny and Sumit came down with the virus so they may just be having fun together. Either way, it is great to see they have recovered and are still very much in love. Do you think they have tied the knot? Furthermore, would you like to see them back on 90 Day Fiance? Let us know in the comments below.