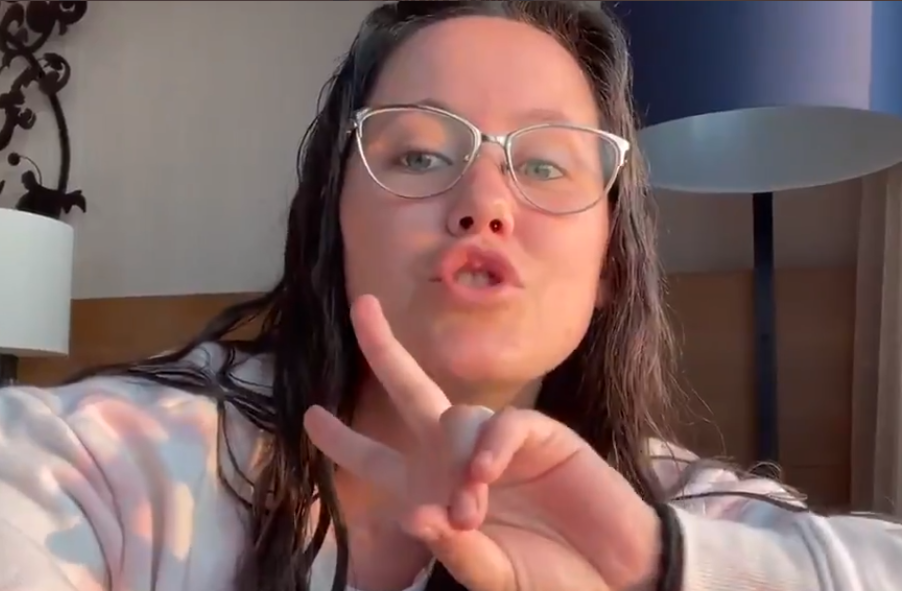 Former Teen Mom 2 cast member is getting people fired up yet again. This time it is over her apparent disregard for people’s health. Despite announcing several times how ‘super sick’ she has been, Jenelle reveals to followers that she has zero intention to get the COVID -19 test. Read on to find out why Jenelle is avoiding testing — and why it’s infuriating her followers.

If you follow Jenelle on any social media, you’ve likely seen one of her recent posts that detail her latest ailment. The 29-year-old mom looks to be quite ill. In one TikTok video, she even shows her husband, David Eason, concocting some sort of radioactive-looking ‘tonic’ for her to drink. The caption on the video says “How to get over being sick naturally. My husband made Dave’s special tonic.” She then takes a shot full of the heinous-looking liquid, making a horrified face and telling the camera it ‘tastes vinegary.’

Yet despite being so sick that she willingly drinks ‘natural remedy‘ mystery concoctions to cure it, Jenelle is not concerned with her health enough to get tested for Covid. Jenelle has small children at home and seems to travel on the regular – so if she were to be contagious right now – she could potentially be endangering everyone she comes in contact with.

♬ Into The Thick of it Forgot About Dre Eminem OJTHE – ojthedj

Unfortunately for the public, Jenelle thinks that having a Covid test is not only a ‘waste of time’ — but possibly dangerous to her own health.

“Yeah, I don’t Know About That Test”

Concerned fans reached out to Jenelle on social media. Many urge her to get the test.  In response, Evans says she most certainly does not have Covid — she has ‘sinus issues.’ In a recent Instagram story that has since been taken down, Jenelle explains that whether you have covid or not, “there’s no medicine that can help you.”

Not long after, Jenelle’s followers were treated to a TikTok video where she shared a post from another content creator, @notacarolinaconservativerz. The video basically consisted of this unnamed woman sharing information from various health authorities, doctors, and various research sources. According to this woman – covid tests are harmful to your health because the swabs are ‘saturated with ethylene oxide.’ The woman reads off a variety of health dangers regarding this chemical. NOTE: She did not show any actual informational text onscreen. So, unfortunately we cannot support or debunk the validity of the sources either way.

According to the video in Jenelle’s post – this chemical causes everything from respiratory issues and infertility to death. Yea – she said it. The woman basically likened a person having the covid test to putting themselves in a life or death situation. Jenelle agreed with the OP on cam, stating – “Yeah, I don’t know about that test.”

While the original video quickly got removed from social media – The Sun was able to get a copy of the original video. Once it went live, viewers immediately took to the comments section. Thousands put the reality celeb on blast. Some calling her out for not going for the test. Others also brought up the fact that she shouldn’t be circulating misinformation – especially with such a large social following.

This is not Jenelle’s first rodeo over covid. Just a few months ago – Twitter lit her up over a number of Anti-Vax themed social media posts. She has come to the conclusion that the vaccine is dangerous. The celeb is sure that nothing can stop you from getting covid — if it even exists. Jenelle went as far as throwing up a poll on Twitter. Posted in December 2020, the MTV alum asked people whether or not they planned to get the shot.

Did y’all see my results on my poll about the vaccine? Hard no from most of my followers. 🤔 pic.twitter.com/wlLcChlN8i

Of course, Jenelle said it’s also a hard no from her. She backs her decision by posting a few viral vids, including one of a nurse feinting post shot. Followers were quick to debunk the message by reminding her that people pass out during medical procedures all the time. Any number of conditions or reasons could have contributed to the incident and that it likely had nothing to do with the vaccine.

In the video that The Sun managed to capture before its removal – Jenelle mocks her naysayers, “for those of you saying, “OMG you can spread it! You don’t even know if you have it!” Listen, I am wearing a mask when I go into stores. Because I know I am ‘somewhat sick’. I haven’t been in any stores. I’ve been staying at home, chilling.”

Yeah, we had to do a double-take as well. She basically said I wear a mask when I go into stores because I know I’m sick but I haven’t been in any stores.

She concludes the clip by putting on a snarky diminutive tone and telling the viewers ‘Don’t worry, I’ll get better and I won’t be contagious… too much longer.’

Want more updates on all your favorite reality celebs? Be sure to check our homepage daily for all the latest news!.