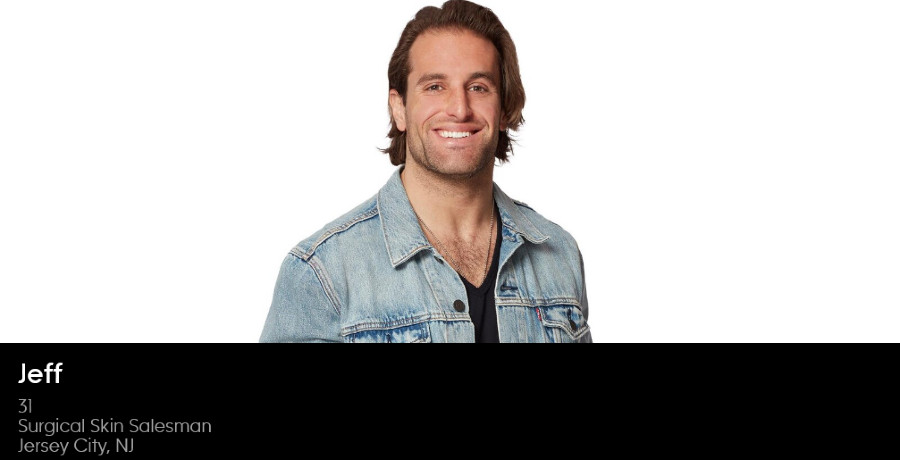 Long-time viewers of Bachelor & Bachelorette are used to seeing some odd contestant descriptions. From “dog lover” to Heather Martin’s “never been kissed,” the odder, the buzzier. But a contestant from Katie Thurston’s season may win “strangest job ever.” What exactly is a professional skin salesman?

Not surprisingly, the network picked the outspoken, confident woman as the next Bachelorette. And Katie does not disappoint in the promos. She tells her suitors to “get out” if they aren’t there for an engagement. The season kicked off on June 7, so fans will have to wait a bit to find out if her season does, in fact, end in a proposal.

In the meantime, viewers are getting to know the contestants via an on-screen blurb that pops up when they are on camera.

One such blurb had fans scratching their heads about what the job entails. Jeff from New Jersey is a “skin salesman.”

Will She Find Love With A ‘Skin Salesman’?

Not just any skin. Jeff is a surgical skin salesman. It still sounds a little odd, so we explored what exactly it entails. It turns out that it’s actually a valiant job. He sells artificial skin for skin grafts and other medical circumstances. For example, a burn patient may need artificial skin. Or a cancer patient.

Is Jeff a good-hearted guy, despite his creepy job title? His bio on the @bacheloretteabc Instagram gives more insight. According to his bio, he “lives for good Italian food.”

If he weren’t a skin salesman, what would be his dream job? A CIA agent. He also brags that “all animals love him,” which may earn him points with Katie. As fans know, she loves cats.

Could it be a match made in heaven?

Not everyone was a fan of the bios ABC’s promotional department cooked up for Katie’s suitors. Bachelor Nation fans took to social media to troll the elementary-looking bios. The facts about each contestant seemed totally random, fans said.

As with Jeff’s bio, the other men shared fun facts about themselves that they thought would help them woo Katie Thurston. Marie Claire collected some of the outlandish bios and fan reaction in a comprehensive article.

Hunter has a parakeet named Zazu. One Bachelor Nation fan called the facts the “saddest” bios.

Do you think the bios ABC created are interesting or cheesy? Share your thoughts on Jeff, the skin salesman, in the comments below.

Tune in for more of Katie’s journey Mondays on The Bachelorette.