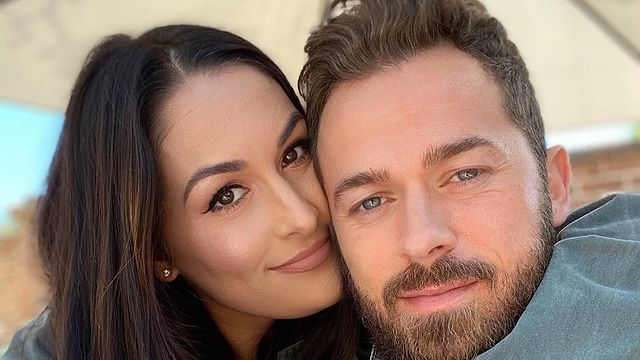 Total Bellas star Nikki Bella and DWTS pro Artem Chigvintsev got engaged in 2019. Today, they share a 10-month old son and a house in Napa. But when will those wedding bells ring?

Not for a while, Nikki Bella confirmed. The couple was in couples counseling to hammer out some issues, but those don’t seem to be part of the reason. The WWE superstar recently chatted with ET about their decision to put things off for a while.

“So Artem and I, the other night, we sat on the couch and we talked about this. I was like, ‘Do you want to start planning now?'” Nikki told the publication. “We’d love it to be in the fall and a few of the venues were like, ‘We’re available.'”

“And what we just started saying is, ‘We’re so busy every day, and we completely remodeled the inside of her home,” she went on to say. “We haven’t even lived in it yet and we’re doing the outside and that takes so much work. We’re still not even done designing. And so he and I both were just like, ‘Let’s get through the house. If it happens, it happens.'”

Nikki added that she really wants her dream wedding to be a big bash that might include elaborate trips to New York to shop for dresses. Right now she feels like planning for a fall wedding would include a lot of cramming.

Nikki Bella may not be planning a wedding right now, but there’s plenty to look forward to

For now, Nikki and the rest of her family are prepping for a pair of upcoming first birthdays. Nikki and Artem’s son Matteo will turn 1 on July 31. Brie Bella’s son Buddy will turn 1 a day later on August 1.

“It has been the most incredible journey so far of my entire life,” the wrestler said about motherhood. “These past 10 months I’ve been my happiest, I have learned so much. I’ve also have had probably more breakdowns because mom guilt is real and you want to be so perfect.”

She added that she likely only has a few seasons left of Total Bellas left in her, as she doesn’t want to raise Matteo in front of the cameras.

“I just don’t want him one day to look at me and be like, ‘You never gave me that choice. You put my life out there and you didn’t let me have a say.’ I want him to have a normal upbringing and … whatever he wants to be, I want him to be. I don’t want it to ever feel like, ‘Well, this is the life you just handed me,'” said Nikki.

However, that may not happen for a while yet. For now, you can keep up with Nikki and Brie Bella on Total Bellas, and on their social media channels too. Stay tuned for more. We’ll let you know more about Nikki and Artem’s upcoming wedding as soon as we hear.