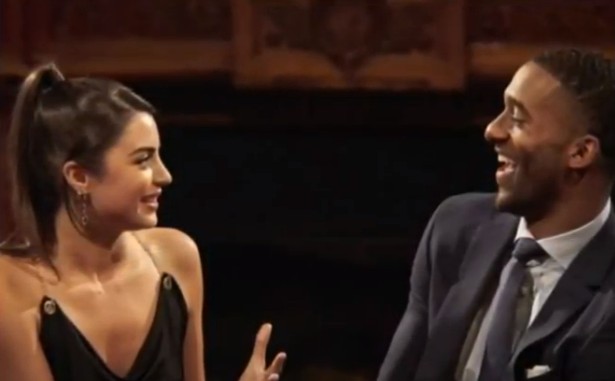 It sounds like it took a nudge from Rachael Kirkconnell to get Matt James thinking clearly about their relationship. The two have seemingly been on again and off again for the past few months. Matt chose Rachael as his final rose winner. However, things went south when past racist actions surfaced involving Rachael. Still, they went back and forth when trying to get back together. Then, Matt apparently finally got the kick in the pants he needed to take things more seriously.

US Weekly shared all about what Matt James said Rachael Kirkconnell said to him. Matt and Rachael haven’t had an easy relationship. The drama surrounding her racially insensitive social media posts took its toll on the couple. Matt said, “Me and Rachael’s relationship was a little different because a lot of things [in the world] were different.” Since they were together during the pandemic things were harder than usual. He said, “We watched a lot of movies. We worked our way through Disney+. There were rough patches in our relationship [and] we actually broke up for a moment. We’re back together [now].”

Matt and Rachael hit it off instantly when they met on his season of The Bachelor. He said the first night he felt an attraction to her. However, he knew there needed to be validation that the feelings were real. It turns out they were and the more time they spent together the more he found himself drawn to her. Matt said he knew pretty early on that she was the one.

Matt also has nothing but praise for his Georgia girl. He said the best thing about her is her heart. Matt said, “The best thing about Rachael is her heart. She’s the most kind, caring person, understanding, I’ve ever met.” He continued, “Everything we’ve been through, everything she’s been through, she’s stuck right by my side. She’s continued to have a positive attitude. It’s one of the many things I love about her.”

So far their second chance is going great. Fans and media spotted them together on multiple outings. They are enjoying being together and getting past their problems.

Do you think Matt and Rachael will make things work long-term?