On social media, Tori shares lots of photos of her two kids, Jackson, 4, and Lilah, 1. She posts often on social media, giving fans a peek into everyday life with the two kiddos. And naturally, fans love the photos she decides to share with them. Fans think the kids are adorable, so Tori’s photos always get lots of attention. In a couple of new posts, Tori has an exciting update to share about her daughter Lilah.

Lilah Roloff is almost on the move

On her Instagram stories for the past few days, Tori has been pretty active. A couple of her recent photos have been of Lilah. Over the weekend, Tori revealed that Lilah is “so close” to taking her first steps unassisted. The mom is sitting behind her daughter and hanging onto her as she walks toward her dad, Zach. Lilah attempts to walk toward her dad but ends up falling on the carpet.

In another snap, on Monday evening, Lilah is pushing a walker outside. Tori adds, “Rain won’t keep this girl from practicing her walking!” In the photo, the little girl is wearing a cute bow headband as she cruises around barefoot outside.

It looks like the Roloff family is eager to see their little girl take her first steps without help. Though she’s not there quite yet, she will be soon. Tori will likely share another update soon and let fans know when Lilah is officially walking.

These photos were posted on Tori’s Instagram stories, so fans can’t publicly comment on them, and they are only available to view for 24 hours. 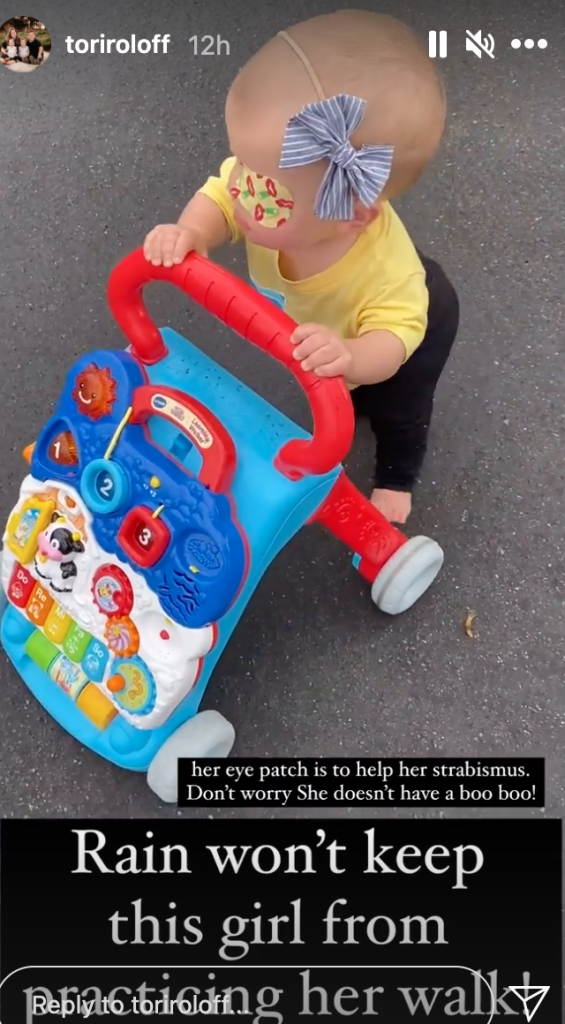 On Lilah’s birthday, in November, Tori shared a milestone update. At the time, she was able to stand with help. The LPBW mom added, “Sweet girl is moving all over and gates have officially been put up everywhere in the Roloff house.”

So, do you think the little one will be walking soon? It looks like she’s almost there! It shouldn’t be much longer before Tori Roloff shares an update that Lilah is officially on the move.