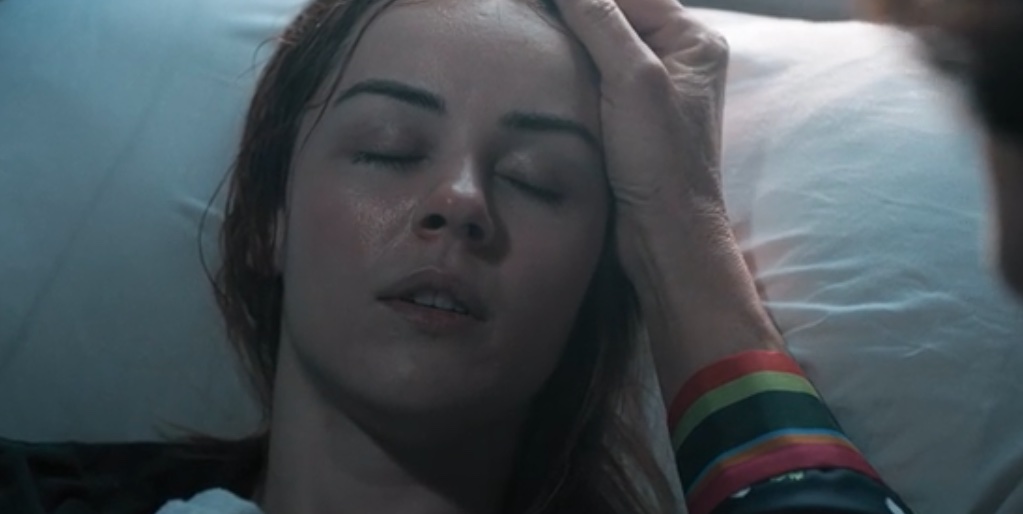 How far will a mother go to keep a secret from her family? What’s hidden in the darkness will soon come to light. Are you ready to find out?

What Is Lifetime’s A Mother’s Lie About?

According to the Lifetime synopsis, socialite Joyce discovers her teen daughter, Katherine (Paxton-Beesley) is pregnant by her boyfriend. However, Joyce (Smits) forbids her from telling him about the pregnancy. Moreover, she bribes Katherine’s doctor to tell her the baby died during delivery.

Twenty years later, Katherine is happily married. However, she is struggling to find a bone marrow donor to save her daughter, Haley (Sarantakis). Desperate, Joyce tracks down Katherine’s firstborn child. Her name is Libby (Keys). Libby accepts Joyce’s offer to be Haley’s donor, not realizing how they’re all related.

As Libby and Haley prepare for surgery, Joyce works overtime to ensure no one reveals Libby’s identity. Soon, Joyce’s lie spirals out of control. Worst of all, Katherine must confront her mother if she hopes to save her daughters.

How far will a mother go to keep her secret under wraps? Find out when you watch the premiere of 'A Mother's Lie' TOMORROW on Lifetime at 8pm/7c! @lifetimetv pic.twitter.com/VWwhJLHjKE

Is Lifetime’s A Mother’s Lie Based On True Story?

Lifetime often airs cautionary tales that are based on true stories. Therefore, is A Mother’s Lie based on a true story? Although this story seems like it could be true, it is not one of the Ripped From The Headlines movies that Lifetime is so famous for making.

However, these sorts of family secrets cannot be disclosed due to medical reasons.

When Was A Mother’s Lie Filmed?

When did Lifetime film A Mother’s Lie? According to Zoe Sarantakis’ Instagram, they filmed this new thriller at the very end of 2020. They filmed this in Ottawa, Canada. Filming commenced in November.

Moreover, this is her very first movie! She posted, “that’s a wrap!!!🎬   so sad that this experience is over but so grateful that it happened. I have learned so much over the past few weeks and had an amazing time filming and being on set! can’t wait for you guys to watch this movie directed by the amazing @stefanbrogren!! also a huge thank you to @themeustalentagency for making this happen!!”

Zoe also posted her gratitude. “So grateful for the opportunity to work with this amazing and talented cast and crew. 🥰🥰 ” Sounds like she had a great experience filming this cautionary tale. Moreover, it sounds like Lifetime fans will enjoy this movie.

Be sure to catch the premiere of Lifetime’s A Mother’s Lie, on Sunday, May 23, at 8 p.m. Eastern, on Lifetime.