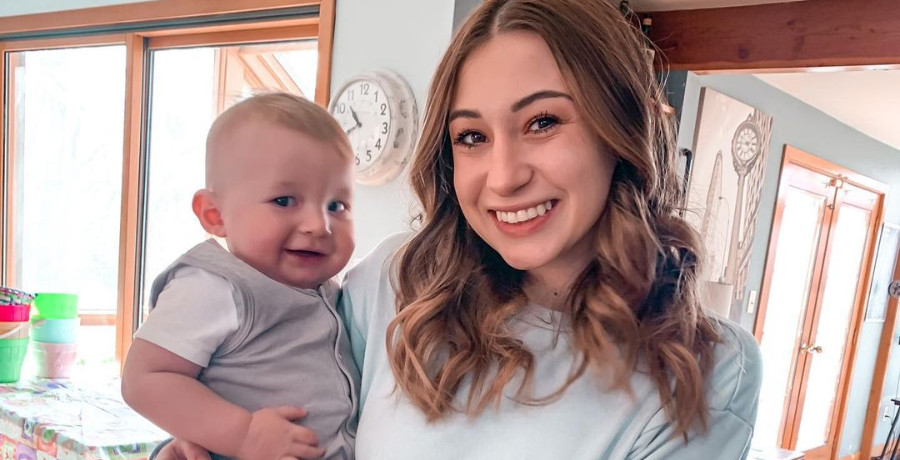 Fans of TLC’s Unexpected are unlikely to forget how Season 4 star Jenna Ronan wound up a teen mom. Early on in the season, her boyfriend Aden Albright admitted to giving Jenna the wrong impression about the birds and the bees. It seems that fans are now wondering if Jenna may be pregnant again. What did she say about the rumors?

Fans of the show also learned that Aden basically lied to Jenna to get her to forgo the necessary precautions. He admitted that he knew how reproduction works. But he told Jenna that men have ovulation schedules, and can only get women pregnant at certain times.

Obviously, that’s not true. And so, the couple ended up as teen parents. Unlike some of the other couples from the show, Jenna & Aden are still together. Season 4 castmates, Myrka Cantu & Ethan Ybarra recently broke up.

Jenna and Aden’s son, Luca, will turn one next month. The couple recently gathered with their friends and family to baptize the tot. Jenna wore a flowing, white dress that seemed to set off rumors they may be expanding their family.

In one of the photos, an eagle-eyed fan noticed what looked like a mic pack on Jenna’s back. The fan asked if Jenna, Aden, & Luca are returning to the TLC show for Season 5. The Unexpected star never replied and TLC has yet to reveal plans for future seasons.

Jenna Ronan caught wind of the rumors that she might be pregnant again. She took to her Instagram Stories to plead with her followers to stop commenting on her appearance. She wrote that she is NOT pregnant. However, the rumors caused her to “cry all day.”

She’s not. However, Unexpected alum McKayla Adkins recently announced she is pregnant with her third child.

Do you hope TLC renewed Unexpected for another season? What do you think about fans always asking celebrities are pregnant? Share your thoughts in the comments.

‘Station 19’: Season 5 Release Date, What To Expect
Kourtney Kardashian, Megan Fox Set Instagram On Fire With Sexy Collab
Is Natasha Parker Open To Being ‘The Bachelorette’ After ‘BIP’ Drama?
Kaitlyn Bristowe Reveals What It Was Like Working With Michelle Young
‘Below Deck Med’: Did Lloyd Spencer Quit Yachting?