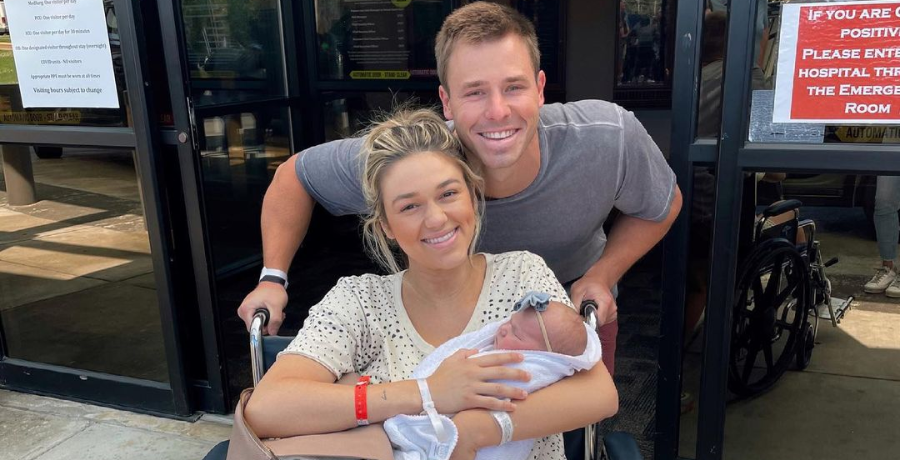 Sadie Robertson is keeping it real. Despite her picture-perfect Instagram posts, the reality star says that the “pain is real” just one week after giving birth. The Duck Dynasty alum is “still in the healing process.” Earlier this month, Sadie and her husband Christian Huff welcomed their first child.

Honey James Huff was born on Tuesday, May 11. This news was met with lots of joy. Sadie couldn’t wait to share the photos of her daughter on Instagram. Even with all those smiling photos, she’s still feeling the pains and aftereffects of her birth. Sadie jumped onto her Instagram Stories to share a rare side to motherhood.

On Friday, May 21, the 23-year-old former television personality shared a personal update with fans on Instagram Stories. Sadie Robertson shared how she’s feeling since giving birth to her daughter. She shared a smiling photo of herself holding her little girl. In the photo, she wore a white t-shirt with gray Alexander Wang sweatpants.

Her daughter wore a bow on her head and a polka-dot onesie. But behind this sweet photo was a raw and honest update about how she’s really been feeling lately. Most new moms can relate to Sadie’s healing process.

“life update bc Instagram can be misleading at times: i am definitely still in the healing process,” Sadie wrote. “Haven’t really moved in the past 2 + days, and been receiving lots of help from my amazing husband and the grandmas. However, I had the best cuddles ever from this snuggle bug.”

Despite her long recovery, Sadie calls postpartum “special in a million ways.” She also acknowledged that “the pain is real and can’t just be ignored.” Sadie says she is “Learning to be still and accept help,” so she can become the best mother to little Honey.

Four days ago, Sadie Robertson shared another update with her followers. She said that she’s learned a lot from her little girl already. This time, she shared a black-and-white photo of herself holding daughter Honey. Sadie wore a black sports bra with sweatpants.

Meanwhile, she swaddled her little bundle of joy in a blanket and pajamas with hand covers. In her Instagram post, Sadie celebrated the first week of the birth of her daughter and what her baby girl has already taught her.

“1 week and you’ve officially changed me for the better. I’ve learned that before I ever get to really teach you a thing you will teach me a million,” Sadie wrote in the heartwarming post.

“my voice is not about the tone or being the best but it’s the thing that makes you feel most at peace so I’ll sing to you forever. you’re my little worship partner :),” Sadie continued. “everyday single day I have a purpose. the greatest job in the world – being your mama.”

Earlier this month, Sadie announced Honey’s arrival with a series of photos on Instagram. Throughout the month, she shared many photos of her baby girl, including one of her baby meeting her cousin Ella Kathryn, whom Sadie’s brother John Luke Robertson welcomed in April with wife Mary Kate. Sadie and Christian announced their baby news in October, with snapshots of them cuddled on the couch and showing the sonogram.