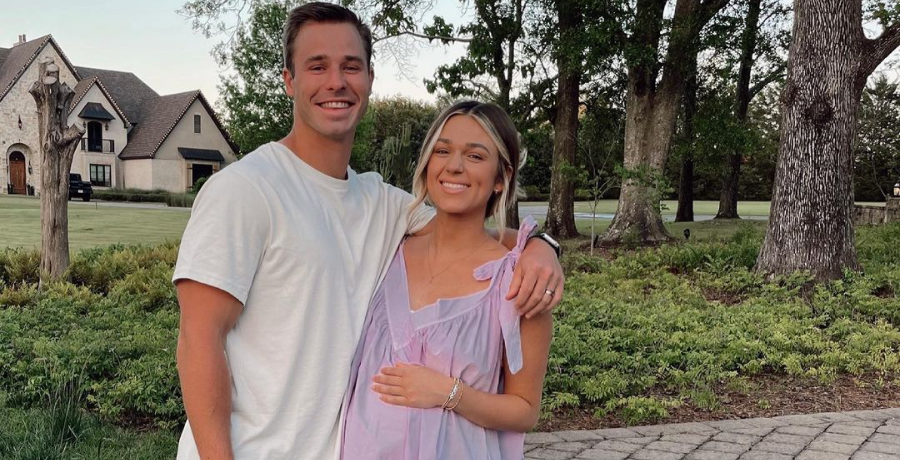 In October 2020, Sadie Roberston announced that she was pregnant with her first child. This came after friends, family members, and complete strangers would ask the Duck Dynasty star if she’s going to have children. At the time, Sadie said she didn’t feel ready. She felt that it was all God’s plan, and didn’t want people to pressure her.

But once she found out about the pregnancy news, something inside her changed. Sadie was elated over the news. Since then, she’s been openly sharing her pregnancy journey on social media. She even had two separate baby showers with her gigantic family.

Last month, the former reality star revealed on Instagram that she and husband Christian Huff came up with the name for their daughter. Sadie Robertson posted a photo of a teddy bear that wore a brown sweater with the word “honey” on it. The stuffed animal sat next to a white unicorn.

In the second photo, Sadie Robertson and Christian Huff smiled wide as they held two different mugs. Christian’s mug had a cross on it, while Sadie’s featured the word “honey” once again. She left a major Easter egg with her fans before spilling the news. Sadie felt called to name her daughter Honey.

“going ahead and telling the world our sweet babies [sic] name because i would rather y’all hear it from me and christian then things going around. this little girl and her name already mean the world to us 💛,” Sadie captioned the post.

The 23-year-old realized that the word “honey” is mentioned in the Bible in Proverbs 16:24 and reads, “Gracious words are like HONEY, sweetness to the soul and health to the body.” The couple planned to name their baby girl Honey James Huff, which is near and dear to their hearts. Sadie has “always loved” the verse for as long as she remembers.

“It’s made me have a love for the idea of all that honey is,” she continued. “It’s a sweet delicacy with a strong healing component.”

When Sadie Robertson and Christian Huff started dating, “honey” became a part of their relationship. They remember seeing the word a lot while reading the book of Proverbs. Not to mention Sadie’s great-grandma enjoys honey. So, the name was kind of a no-brainer.

Sadie Robertson and Christian Huff introduced their little girl to the world. On Wednesday, May 12, she shared a series of photos of herself from the hospital bed. In the caption, Sadie wrote: “we saw a million little miracles yesterday – the best one being this girl right here… Honey 💛.”

Their daughter was born on Tuesday, May 11. Sadie remarked that their little girl was born from “the pure goodness of God.” She teased that there will be more to come. On Thursday, May 13, Sadie shared a photo of their little girl, who wore a sweater similar to what the teddy bear in her previous Instagram post wore.

“good morning world !!! I thought you might could use 9 pounds and 5 ounces of straight up goodness 🍯,” Sadie captioned the photos.

We here at TV Shows Ace congratulate Sadie Robertson and Christian Huff on their little bundle of joy.