There is a section of Storage Wars fans that are especially thirsty for Brandi Passante. Many of them even have enough guts to take their extremely perverse desires to her Instagram DMs. As we’ve previously reported, Brandi Passante has no qualms about putting the creeps on display via her Instagram Stories. That, however, doesn’t seem to have stopped or slow them down. In fact, Brandi Passante being on TV may have just ramped them up even more.

Just recently, one Storage Wars fan took to Brandi’s DMs to ask her to humiliate him. Like many before him, Brandi Passante was quick to put him on display. In fact, she was happy to oblige his request. But, not in the way you might think.

According to a recent Instagram Stories update, one fan asked if they could pay Brandi Passante to humiliate them. The A&E personality posted a screenshot of the DM on her Instagram Stories. She, however, did not appear to respond or even accept the DM. See the screenshot from her account down below. 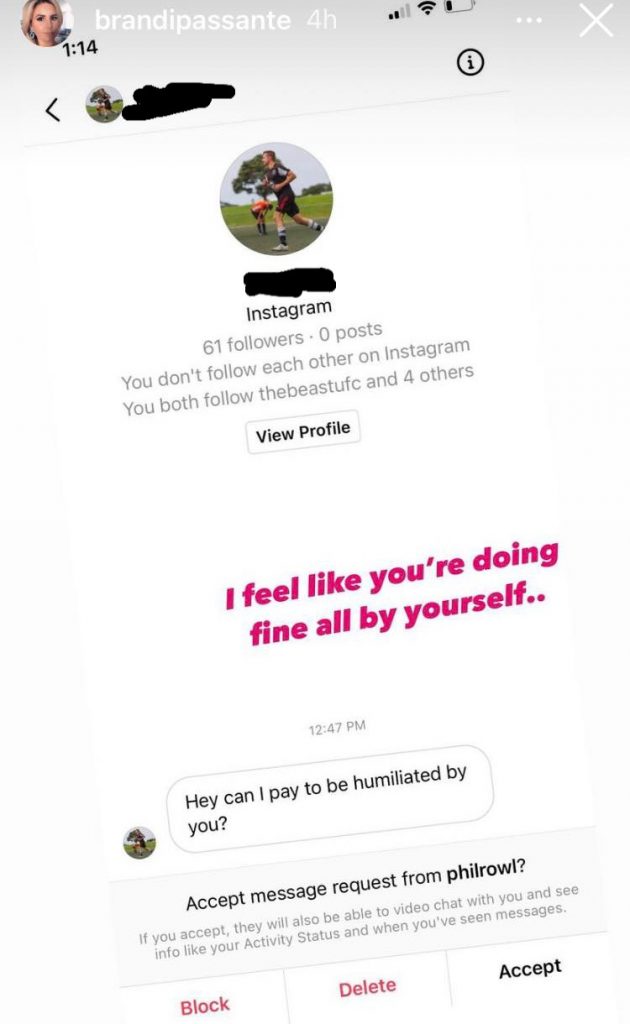 Brandi Passante did respond to the strange request via a caption she added to the picture before posting it on her Instagram Stories. She noted she didn’t think he needed to pay her to do anything to humiliate him. In fact, she thought he was going a pretty great job of humiliating himself.

This time of engagement is pretty normal for her

Anything the Storage Wars queen posts on Instagram that is even remotely considered sexy… The creepy portion of her fan base quickly reacts. Her comments are often riddled with somewhat disturbing comments. In fact, there is even a Facebook group dedicated to fans that find her attractive. And, as we mentioned previously, she’s never been afraid to humiliate these followers with a few screenshots and a clap back on her Instagram Stories

Jarrod Schulz was recently charged with domestic violence against Brandi Passante. This news resulted in fans of the gorgeous mother-of-two running to Jarrod’s Instagram to attack him. While Jarrod isn’t exactly active on social media, fans flocked to chew him out regardless. Many noted he really “messed up” by letting someone as attractive and brilliant as Brandi get away from him.

How do you think Brandi Passante deals with the creepy messages she receives? Share your thoughts with us in the comments.

Khloe Kardashian Reveals Truth About Relationship With Tristan Thompson: Are They Together?
This Is Why Tayshia Adams & Zac Clark Stopped Sharing Photos Together
‘Bachelor Klan’? Rachel Lindsay Burns Bachelor Nation To The Ground In Searing Interview
’Record Of Ragnarok’ Season 2 On Netflix: Canceled Or Renewed?
Savannah Chrisley Gets Picked Up In New Guy’s Sweet Truck