Unfortunately, it seems like Teen Mom 2 newcomer, Ashley Jones’s fiance is in some trouble. This news comes shortly after Ashley shares some exciting news with fans. Ashley shares that she is a college graduate. Not only that, fans of Teen Mom 2 recently see her and her long-time-on-again, off-again boyfriend, Bariki Smith get engaged (again). Viewers that follow Ashley since she was on Young & Pregnant know that this is the third time for the couple. However, Bar’s current situation may make their future plans slightly difficult. Keep reading to find out what is going on with Ashley’s fiance, Bariki Smith.

Just one day after Teen Mom 2 newcomer announces she graduated from college, her fiance gets arrested. Consequently, Bariki’s charge isn’t something to be taken lightly. According to his booking details, Bar’s charges are a felony gun charge. Starcasm reports on the details.

According to Starcasm, Bariki Lockett Smith was arrested Sunday, May 16th. He was booked into Merced County Jail in California. There are a couple of ways Bar could have gotten this charge. The charge listed is “willful discharge of a firearm in a negligent manner.” Ultimately, police have enough probable cause to “believe Bar fired a gun that he knew was loaded in a situation that shot could have potentially harmed someone.” However, as Starcasm points out, this charge “would cover someone firing a gun in the air during a celebration.

As of this writing, Bar’s bond is $25,000 and he is no longer listed as “being in custody.” Another thing of note is the shirt that Bar is wearing. It looks like a Froot Loops shirt, but it actually says “Shoot Loops.” Starcasm is able to confirm this due to a viewer tip about an episode of Teen Mom 2 he was wearing it in.

While fans may be wondering about the couple’s relationship status, it is hard to tell. There is currently no evidence of Bar on Ashley’s social media. Not only that, neither of them has given a statement about the arrest. 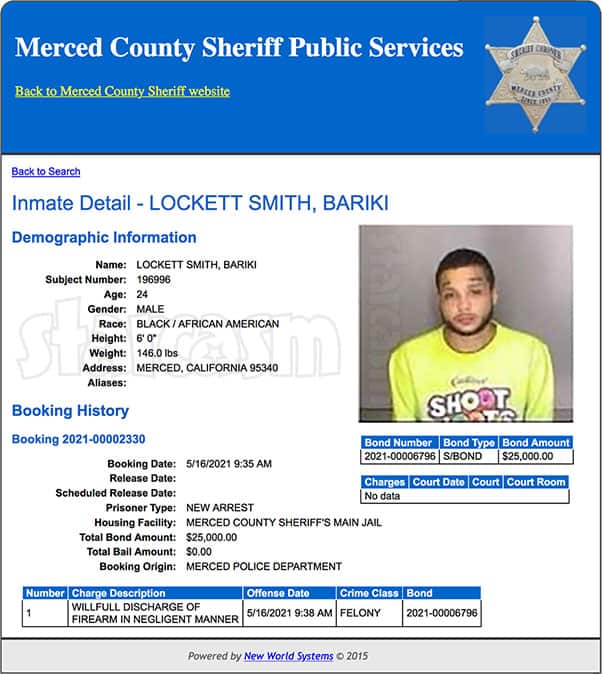 Unfortunately, this isn’t the first time Bar lands behind bars. Past charges include meth possession, providing false information to a police officer, and trespassing in 2015. In 2017 another one of Bar’s arrests is featured on an episode of Teen Mom: Young and Pregnant. This arrest is the result of an altercation with Ashley and her parents. Then, in 2018, he goes to jail for the alleged domestic battery of Ashley. Finally, in 2020, Bar gets booked on assault, domestic battery, driving or taking a vehicle without the owner’s consent, and child endangerment.

Do you think Teen Mom 2 Ashely Jones is going to stay with Bariki Lockett Smith in light of this latest drama? Let us know your thoughts in the comment section below. Make sure to come back to TV Shows Ace for more Teen Mom news.