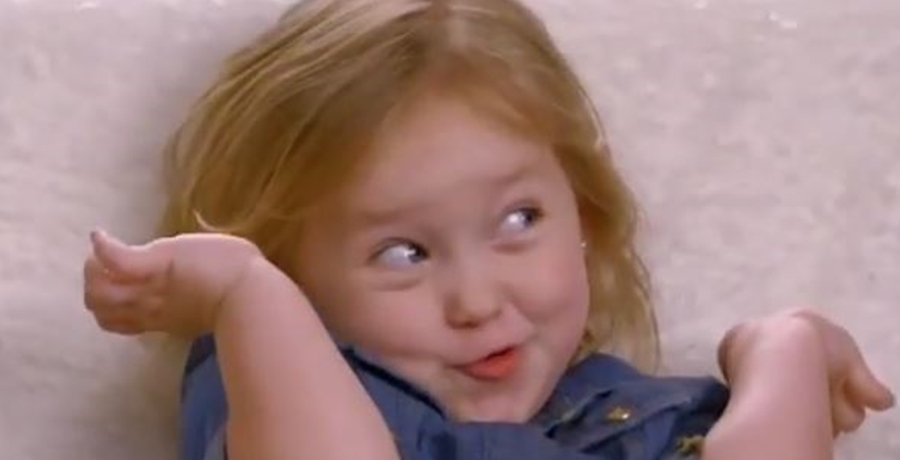 WEtv’s Mama June fans know that Pumpkin Efird expects baby number two. They heard it from Pumpkin and saw it on a recent episode on Road To Redemption. On Saturday, May 15, the network revealed a photo of Pumpkin’s daughter Ella Grace, with her pregnant mom. They invited fans to caption it, and some rather good ones came out. Actually, fans just love it when they receive interactive invites.

Fans agree that Ella Grace seems as sweet as a peach and they love seeing photos of the cute little girl. The little Pre-K kid expects a sibling sometime this year, so no doubt more adorable photos come in the future. In a recent episode, fans saw that Geno and June also adore Ella and they went crazy buying toys for her after Pumpkin sent them an invite to her birthday. Unfortunately, Sugar Bear also got an invite, as Josh didn’t know about Pumpkin’s invite. Anyway, that’s a different story which we’ll talk about further down in this article.

Pumpkin, as WEtv’s Mama June fans know, seems a bit further along in her pregnancy than fans thought. That became apparent in a photo that Pumpkin shared last week. It revealed her wearing overalls and looking well advanced. In the show though, she and Josh only just found out about her pregnancy. So, it’s hard for fans to work in the real world and watch the retrospective show. However, a lot of fans think that little Ella Grace might make a wonderful big sister to the new baby. That emerged in some of the captions in the interactive post this weekend.

Fun captions about Pumpkin and Ella

We got each other babe.

Whats the theme of this Burdae Party we having again? All the adults need to keep one thing in mind… Princess Ella is in charge of this Kingdom ❤️ 👑.

You gunna eat that bacon?

Your hugs are too much HELP

What did you say, little brother?”

Other WEtv’s Mama June fans just commented about how very sweet little Ella is. Meanwhile, others praised Pumpkin for her strength and fortitude as she goes through difficult times on the show.

On the show, when Pumpkin invited June and Geno, she and Josh only just found out they expect a baby. Josh let it slip to Sugar Bear when he asked for a job. Of course, he then let it slip to Jennifer. Poor Pumpkin. It looks like Jennifer’s ready to spread the word before she can even make her happy announcement.

Remember to check back with us often for more news about Pumpkin and Ella Grace on WEtv’s Mama June.