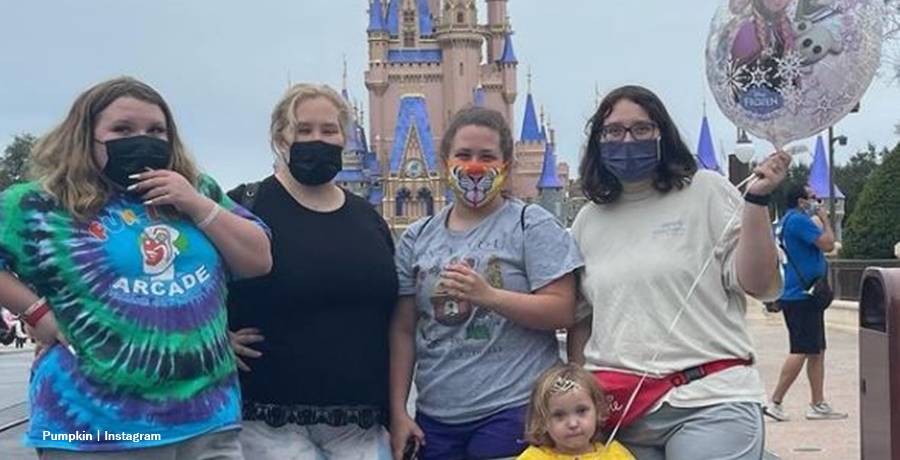 Pumpkin baby bump news gets Mama June fans all excited about her pregnancy. This week she posted up a photo of herself wearing denim overalls. In the comments, a lot of people wondered how far along she is. The happy news about baby #2 only recently emerged and it looks like she might be further along than previously thought. When fans asked about the gender, the mom of Ella Grace seemed hesitant on revealing that just yet.

Back in August last year, rumors arose that the Mama June family might welcome another little kid. It came after Mama June’s daughter said that she and Josh Efird try for another baby. Well, when fans saw teasers for the new season of Road to Redemption it seemed that perhaps she lost her mind. After all, she and Josh bickered and fought a lot. In fact, some fans lambasted her for treating him so badly. However, it seems they moved on from that these days.

On April 9, Pumpkin confirmed her pregnancy and everyone scours her photos for signs of a baby bump. A lot of speculation arose about whether the Mama June show reveals more about her falling pregnant. While fans know the baby comes in 2021, nobody knows the actual due date yet. Now that she shared another photo, fans seem convinced that she’s further along than previously believed. Hollywood Life reported that Ella grace’s mom seemed very excited about the next baby. She said, “After almost 3 years we are finally having another blessing and couldn’t be happier.”

Further along than WEtv fans thought

The new photo of Pumpkin showing off her baby bump revealed that she’s quite big already. One fan said, “your stomach [is] big so I think your (sic) having a boy.” Then another one asked, “when are u due? You are a great Mama and a fantastic role model for your sister.. u keep on rocking girl.. and I say boy 💙.” Well, it seems that for now, the Mama June star keeps her due date private as she never replied. She also ignored other people who asked the same question.

Discussing Pumpkin baby bump news, a whole conversation rose about the gender. Will she do a special reveal? Or will fans see more about her pregnancy via the show?  fans asked. Others who guessed a boy or a girl hoped for an answer. Well, she gave her answer, saying, “stay tuned.” That might mean stay tuned into Mama June. Alternatively, it might mean just be patient and check back with her often.

How far along do you think the WEtv star is? Sound off in the comments below. Remember to check back with us often more about Pumpkin baby bump news as her pregnancy progresses.