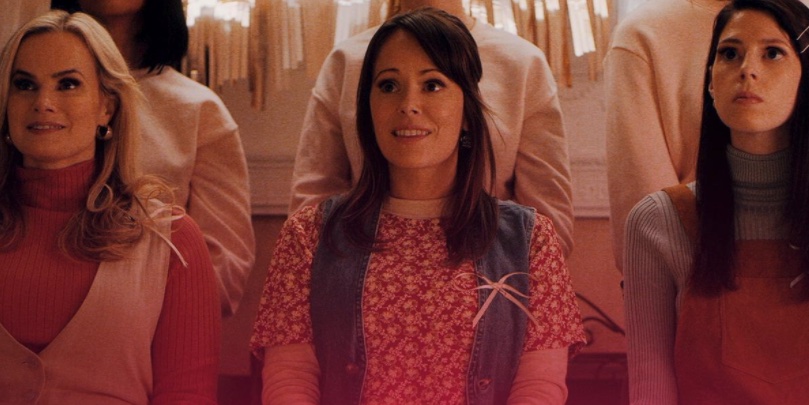 How can an innocent thing like sorority week turn into a cautionary tale? Well, buckle up, because Lifetime has quite the story!

What Is Lifetime’s Secrets On Sorority Row About?

According to the Lifetime synopsis, Michelle (McKamie) is excited for her daughter, Quinn (Edmonds). Quinn is getting ready to pledge the same sorority she and her best friend, Stacey (Buglioli), pledged when they were in college.

She is especially happy when Quinn becomes friends with a fellow pledge, Lucy (Hank). However, Michelle and Stacey start receiving anonymous letters threatening them. They are worried because they have a very dark secret. They do not want it exposed.

Michelle worries a dark secret she shares with Stacey has come to light. Way back when Michelle and Stacey were in college, they forced fellow pledge, Kelly (Tatem), to drink an excessive amount of alcohol. Unfortunately, Kelly fell down a flight of stairs. This fall resulted in her death.

Moreover, Michelle and Stacey made a pact to keep the incident a secret. Yet, what they didn’t realize is that Kelly had a secret child. Subsequently, Michelle learns the truth. Turns out, Lucy is Kelly’s daughter. And she is determined to avenge her mother’s death.

According to that synopsis, Lacey is a beautiful college freshman. She is beyond excited to be rushing Kappa with her best friend Tara. That is until an initiation hazing goes too far. Subsequently, Lacey walks out on them, pledging to another house.

Despite the incident, Tara stays with Kappa. Unfortunately, this is a choice that strongly tests the two friends. Soon after, tragedy strikes when Tara suffers a horrific and mysterious death at a frat party.

Meanwhile, the Kappa sorority turns against Lacey, accusing her of murder. Her mother, Britney, who was once a Kappa sister, battles to clear her daughter’s name. The police charge Lacey with the crime. This forces both mother and daughter to track down the real sorority sister killer that has made them a target.

When Can You Watch Secrets On Sorority Row?

Don’t forget to watch the premiere of Lifetime’s Secrets On Sorority Row, on Saturday, May 15, at 8 p.m. Eastern.