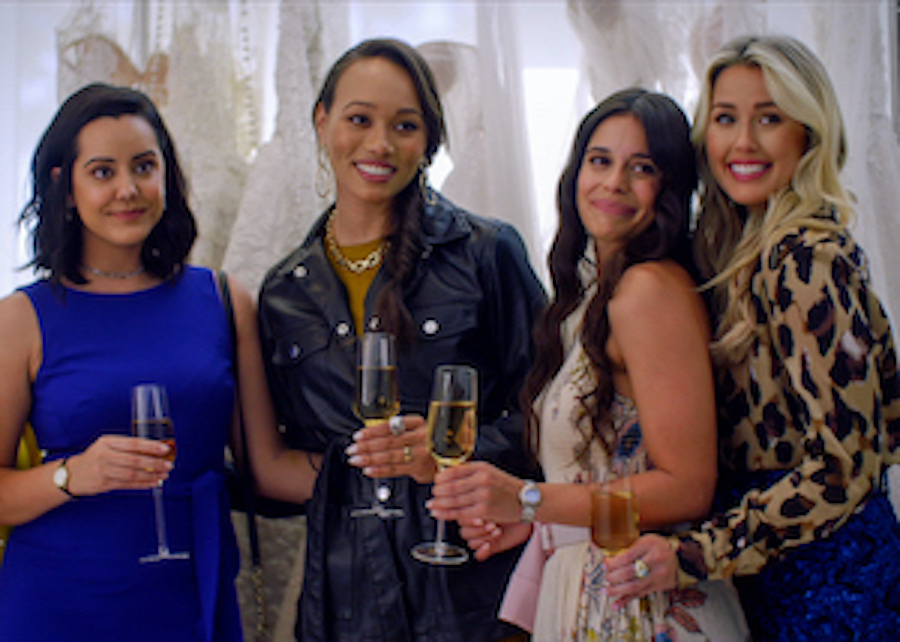 Could the best day of your life turn into the worst day of your life? Only if you are the bride in Lifetime’s Brutal Bridesmaids. This LMN thriller stars Zoila Garcia (Our Neighbor’s Shadow), Kevin A. Walton (Sistas), Amanda Tavarez (Queen Sugar) and Karlee Eldridge (Ballers). Will jealousy get in the way of friendship?

This is the latest movie in Lifetime’s Wicked Revenge Series. Are you ready to walk down the aisle with a group of jealous bridesmaids?

What Is Lifetime’s Brutal Bridesmaids About?

On the LMN preview, after becoming engaged to Michael (Walton), a handsome and successful businessman, Jessica (Garcia) selects her five best girlfriends to be her bridesmaids.
However, when the group gets together, they find themselves letting old wounds and jealousy get in the way of bonding as they all compete over Jessica’s friendship. When mysterious accidents and illnesses start to inflict the group, Jessica fears one of her bridesmaids may not have her best interest at heart.
Turns out, each of her bridesmaids seem to have their own reason why Jessica should not marry Michael. Subsequently, Jessica now must determine which of her so called sisters is out to sabotage her big day. Moreover, she better do it fast, before it is all too late.

Complete your weekend and check out Lifetime’s Girl In The Basement. This movie is airing on Lifetime on Saturday, February 27, 8 p.m. Eastern. This stars  Stefanie Scott (Insidious: The Last Key), Judd Nelson (Breakfast Club), Joely Fisher (Last Man Standing), and Emily Topper (The Chosen One), in Elisabeth Röhm’s directorial debut.

Part of the Ripped From The Headlines series, this is a story that was based on real-life events. This is the story of Sara, who is anxiously awaiting her 18th birthday. She wants to move away from home and her controlling dad.

Unfortunately, she is not able to escape. Her dad locks her in the basement. She undergoes rape and torture, while her mom and sister live upstairs, in the very same house, without knowing anything. Her mother always wonders what has happened to Sara, but her father negates her concerns.

Sara winds up having several children. Unfortunately, they are all trapped in that same basement prison. Eventually, Sara gets out. But the aftermath is unbearably shocking to her family.

Immediately after Girl In The Basement, is the documentary, Beyond the Headlines: Surviving Child Abduction and Imprisonment. This documentary features two real abduction survivors.

The stories are about Lori Poland, kidnapped at 3 and left for dead in an outhouse in 1983. In addition, the second story is about Katie Beers, abducted and imprisoned for 17 days by a family friend in 1992.

Both women recount their horrific abduction experiences. Moreover, they share their insight on overcoming and transcending past their childhood traumas.

When To Watch Lifetime’s Brutal Bridesmaids

Be sure to catch Lifetime’s Brutal Bridesmaids on Friday, February 26, at 8 p.m. Eastern, on LMN.

‘Chrisley Knows Best’ Savannah Chrisley Gets Tropical
Fans Petition For Netflix To Cut Ties With Colton Underwood
‘The Bold And The Beautiful’ Spoilers: Do Bill and Liam Get Caught?
‘Days Of Our Lives’ Two Week Ahead Spoilers: Gabi & Philip Hit The Sheets- Ava & Rafe Kiss
Exclusive: Elaine Culotti Comes Out In Emotional Reveal on ‘Undercover Billionaire’