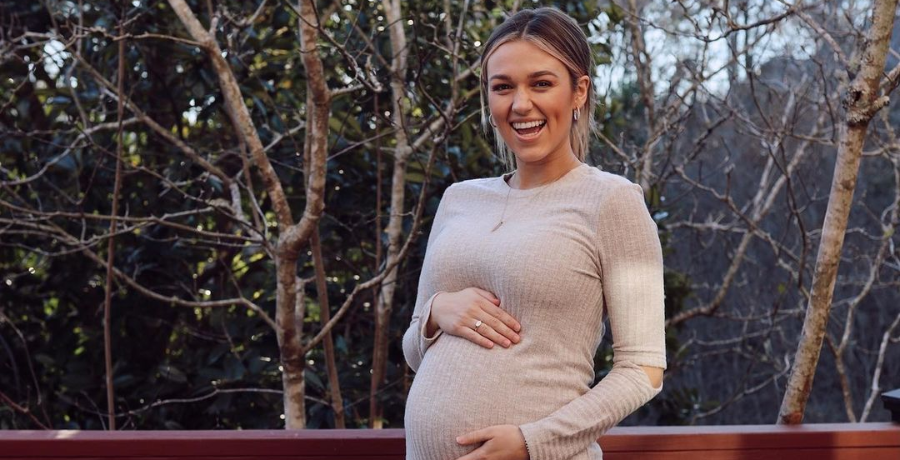 Pregnant Sadie Robertson had a joint baby shower with sister-in-law Mary Kate Robertson. The Duck Dynasty alum posted photos from the event on Instagram. She also shared the exact moment she learned she was pregnant. In October 2020, Sadie announced that she and her husband Christian Huff are expecting their first child.

TV Shows Ace previously shared the photos from Sadie’s own baby shower. But she agreed to have another one with her sister-in-law. As fans know, the Robertson family is large with many kids. Due to the ongoing coronavirus pandemic, it wouldn’t be wise to have them all in one room together.

That could be the reason for the need for separate baby showers.

Sadie Robertson reveals the moment she first learned she was pregnant

On Monday, March 1, Sadie Robertson shared a carousel of photos from her joint baby shower with Mary Kate Robertson. Both ladies showed off their ever-growing baby bumps in the photos. Mary Kate opted for a white prairie-style dress with blue flowers, while Sadie wore a pink gingham dress. Both ladies looked happy and excited in the photos.

“A week and a half apart and lifelong built-in besties,” Sadie continued in the post. “can’t wait to meet our girls! Loved celebrating with you today! Thank you to all the amazing women who put on our shower for us. It was so special.”

As of Tuesday, March 2, over 538,000 followers liked the post. Jeanine Amapola commented: “So cute” along with the crying emoji. Mary Kate wrote: “The absolute sweetest blessing!! It’s been so special & I think it’s only going to get more & more fun!!” Sadie’s followers and fans commented on their beautiful dresses and heartfelt story.

Since her October 2020 announcement, Sadie Robertson has kept her fans informed. However, most people don’t share the news until their first trimester. But she was too excited to keep this news to herself. Christian and Sadie shared the news just 11 months after their wedding.

Mary Kate shared her pregnancy news with her Instagram followers in November 2020. This is her second child. In her pregnancy announcement, she reflected on her baby boy’s first-year last month. The Christian blogger and her husband, John Luke, became first-time parents in October 2019.

Sadie shared even more photos from their baby shower. This comes after she posted a question she gets asked a lot. Her fans wanted to know how she remains so positive, even in tough times. She explained that it’s the “joy” she feels from God.

“Joy is not just an outward expression, but an inward presence of Jesus,” Sadie wrote in the lengthy caption. “When we get the Word of God in our hearts and we draw near to the presence of God then our expression can be that of JOY!”

She encouraged her followers to download the Glorify app to get some of that joy. Check back with TV Shows Ace for more news on Sadie Robertson.