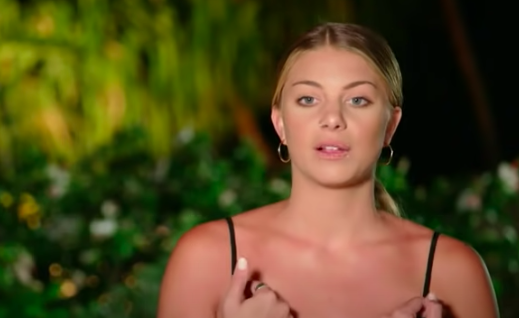 Temptation Island may have come to an end. However, that doesn’t mean that the stars aren’t still getting hate and comments. Temptation Island Erin is addressing these comments on her TikTok.

One of the fan-favorite couples this season of Temptation Island was Erin and Corey. Now, Erin is talking about all the hate she gets on social media.

She took to TikTok to join in on the “tell me…” trend. Essentially the person making the video says to tell them something without really telling them, then does an action or shows a photo. Erin tailored this to her own situation currently.

Behind her, there are several tweets. All of them are negative things that people have said about herself and Corey on social media.

“TBH these were some of the nicer ones…,” she writes in the comments.

So, clearly, she saw a lot meaner than what she listed in the video. However, that doesn’t mean that what she listed was in any way nice. Turns out a lot of people really hate her, just because she’s on Temptation Island and she didn’t act exactly how fans wanted.

Tbh these were some of the nicer ones.. #realitytv #temptationisland

“Erin & Corey are so fkn boring, lamest couple, just break up yall know w you both want to #temptationisland,” another says.

“What tf is Erin wearing on this reunion,” someone else says about what she wore to the reunion episode. “Like who let her put that on.”

Finally, someone commented on what Erin deserves.

“Send Erin home with a soccer ball. That’s about all she deserves.”

Overall, it seems that Erin is still facing a lot of hate even though Temptation Island is over. Lucky for Erin and Corey though, the show worked out pretty well for them.

What are Erin and Corey up to?

When they left Temptation Island, Erin and Corey were happy together. Once they got to the reunion episode though, it appears things have changed. However, all is well in paradise now. The couple is constantly posting on Instagram together.

Clearly, Temptation Island really worked out for Erin and Corey. Hopefully, the hate will start to subside.

Do you follow Temptation Island Erin on TikTok? Let us know in the comments below. Come back to TV Shows Ace for more news on all of your favorite reality TV stars.