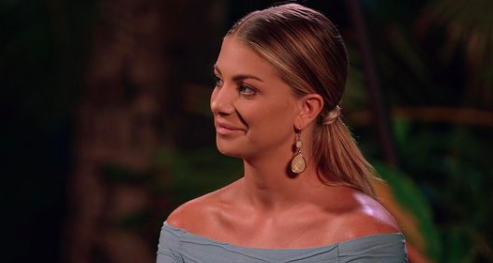 If fans are still wondering if Temptation Island Erin and Corey are still together, that question has been answered. In a new Instagram post, Erin is getting a big smooch from Corey.

As soon as Erin and Corey entered Temptation Island it seemed like they would stay together. Erin held on tightly to Corey’s hand as they introduced the singles. But, when they went to their own villas, they both went through a lot of self-growth.

They agreed to stay together after the final bonfire, but things got dicey during the reunion. Luckily fans can turn to Erin’s Instagram to see how the couple is really doing.

She just posted a photo of herself and Corey and honestly, they look stunning. Working through their problems looks great on them.

Erin is wearing a tight red dress with her blonde slicked back. She is getting a big smooch from a  dapperly dressed Corey on the cheek.

She captions the photo: “Ladies and gentlemen… Him ❤️.”

Their love for each other can be felt in the photo. Corey even responds to Erin in the comments reciprocating the feelings.

It seems like the show really ended up bringing these two together. Now, they will hopefully stay together forever.

Erica didn’t take this lightly and ended up breaking up with him at the final bonfire.

Of course, fans were skeptical that they would still get back together. But, Erica shares things on her Instagram. She lets everyone know that they are not in fact still a couple.

Erica says that they don’t even talk anymore because there is no reason for them to. At the end of the day, she just wishes them (Kendal and Alexcys) the best.