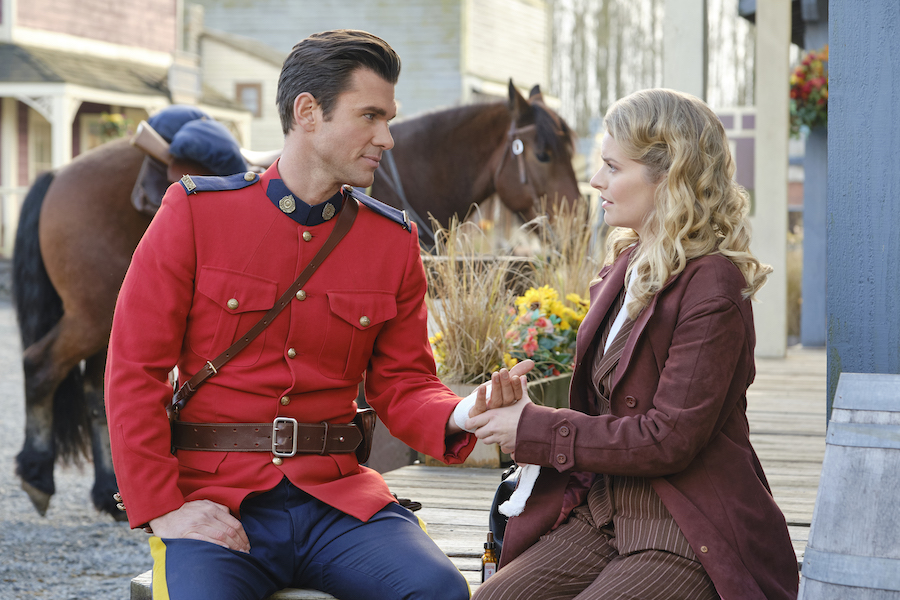 The When Calls The Heart Season 8 finale is a little different than normal weeks of the Hallmark series. That is because they are adding extra minutes to this episode. Moreover, Hearties will likely not want to miss a second of this longer than usual episode.

How long with the episode “The Kiss” last?

When Calls The Heart Episode ‘The Kiss’ Is A Little Longer

Hearties, are you ready for the When Calls The Heart Season 8 finale episode. This episode is entitled “The Kiss.” After yet another season of the love triangle dragging on, they are finally going to let this end. Elizabeth Thatcher Thornton will finally pull off Jack’s wedding ring and be ready to commit to either Mountie Nathan or saloon owner Lucas.

Although, she has spent most of Season 8 staring blankly at Nathan while dating the ever-patient Lucas. However, it appears that one hour will not be enough. Instead, “The Kiss” will be a little longer than a normal episode.

How Long Is The Upcoming Finale Of When Calls The Heart Episode?

When the When Calls The Heart Season 8 finale episode airs, it will be a bit longer. According to the Hallmark Channel schedule, the Good Witch Season 7 sneak peek will not start until 10:06 PM Eastern. That means that the finale episode entitled “The Kiss” will be six extra minutes long.

For the next 14 hours, the Hallmark schedule will be a little wonky, but Hearties will not mind. The extra minutes of this highly-anticipated episode will be worth it.

Moreover, those last six minutes will likely show us who Elizabeth picks. We can safely bet that this is the time that Elizabeth kisses big ones with her chosen guy. You don’t want to miss that!

So, What Should Hearties Expect In Season 8 Finale Episode?

On Thursday night, When Calls The Heart stars Erin Krakow, Pascale Hutton and, Kavan Smith spoke with Deidre Behar about the final episode. The Hallmark Channel YouTube page published this episode so that fans can get an idea of what is to come.

Erin Krakow confirmed that the finale episode will show Elizabeth picking her guy. First, she will remove her wedding ring. This is an emotional moment that signifies that she is ready to open up to love again.

In the exclusive episode preview, we learn that her school may be shut down. That is because Elizabeth is determined to teach Angela Canfield, her new student. The powers that be say that Elizabeth is not qualified to teach her. However, Elizabeth refuses to give up on any of her students. Especially one that shows as much promise as Angela.

Although Angela’s mother Minnie wants to pull her out of school, it seems that Elizabeth is in a no-win situation.

Could one of her two suitors help Elizabeth solve this dilemma? Could this be how she chooses her man?

Hearties, be sure to catch the Season 8 finale episode of When Calls The Heart on Sunday, May 9, at 9 PM Eastern. Plan on hanging around a few more minutes to catch the whole story. This longer episode promises to be packed full of fun!