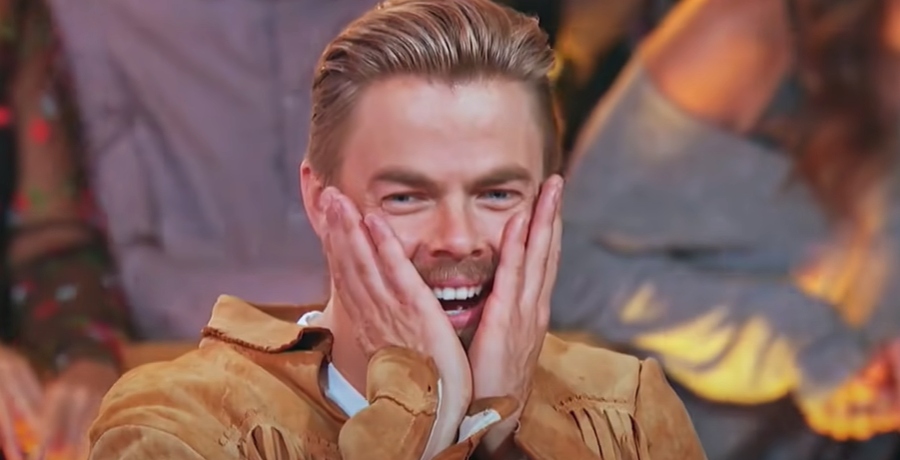 Dancing With The Stars fans are incredibly familiar with Derek Hough. For several seasons, he dazzled television screens all over America and went on to win six Mirrorball Trophies. After briefly leaving the show, he returned to Season 29 as a judge. ABC expects he will reprise his judging role in Season 30. But spending so much time in the ballroom is bound to result in a few fumbles.

Derek Hough recently sat down with Us Weekly to talk about some of his most embarrassing moments on the show. One particular incident involves Derek’s debut season all the way back in 2007.

Derek Hough may be a skilled dancer, but that didn’t stop him from dropping one of his celebrity partners

“In my very first season, my second dance, this is when I’m like, ‘This is my chance. I’m going to show what I got. This is my first time on TV doing this.’ And I dropped my partner, Jennie Garth, on live television,” Derek admitted to Us Weekly.

“Which by the way, dropping your partner and falling on live television … But it was, like, the worst thing, but the good thing about that is I got that out of the way real quick. That’s the worst thing that could possibly happen, so it’s only uphill from here,” the 35-year-old dancer continued.

But even so, Derek and Jennie Garth finished in fourth place that year. His sister, Julianne Hough, took home the Mirrorball Trophy with Hélio Castroneves.

Even the most decorated pro dancers make mistakes from time to time. However, Derek Hough has had plenty of redeeming moments on the show. He told Us Weekly that partnering with Kellie Pickler for Season 16 was one of his most memorable seasons.

“The one very memorable moment was when I danced the freestyle with Kellie Pickler. That was a dance that was a risk. I was like, ‘Let’s do something different from everybody else.’ It was the first year they were doing super-sized freestyle and everybody’s doing more and more and more,” Derek said.

He and Kellie Pickler went on to take home first place that season. But he has plenty of favorite partners.

“Amy Purdy was incredible. Obviously being a paralympian and working with prosthetics, she was incredible. But also, Bindi Irwin, she just kind of walked in the room and was like she just got off a hike with muddy boots and then she was phenomenal. She was fantastic,” Derek said of his former partners. “Also, Kellie Pickler, she was a big surprise as well with no dance training. She just had the most extraordinary feat and beautiful extension, and it was awesome.”

Although Derek Hough plans to return to the judges’ table for Season 30, he did recently say in an interview he won’t completely rule out returning as a competitor someday. What do you think? Would you like to see Derek Hough compete for another Mirrorball Trophy? Let us know in the comments.