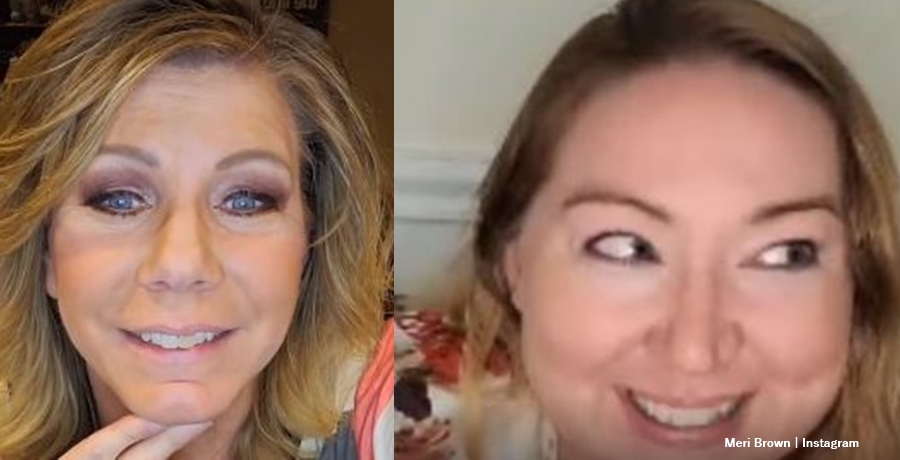 Meri Brown’s best friend Jen joins her nearly every Friday for her Fridays With Friends live podcast on Instagram. Fan enjoy it as they interact with their favorite Sister Wives star in the comments. However, TLC fans also love it because they see a very different person on their screens. Meri relaxes, laughs, and jokes with her friend and that gives fans an insight into the “real” person that they don’t often see on the show.

People new to the weekly Live session don’t know who Jen is. So, we checked it out and reported that they go back quite a long way. They actually met when the Sister Wives family all lived in Las Vegas. However, Jen Sullivan might live in Oregon. Funny, and full of banter, fans sit back and just enjoy the ride as these two besties chatter away about all sorts of things, In fact, sometimes, Meri overruns the clock. For many people, they feel like they actually sit in the same room with these two characters. Most people agree it’s lighthearted and even hilarious.

Meri Brown’s best friend Jen probably reached out and gave solace to Meri when she left Flagstaff. Recall, a couple of seasons ago, neighbors objected to a polygamist family living next door. It really upset Meri, who gave up her lease, left town, and went back to Vegas. Apparently, she also moved back into her old place for a bit. Fans know that right now, Meri grieves for her mom Bonnie who passed away just over a month ago. Probably, chatting with Jen every Friday helps take her mind off her sorrow.

Jen gets egg on her face, literally

The conversation this week centered around Meri Brown’s best friend who put her home on the market. Anyway, she expected people around to view the property. As she had a bit of time, Jen decided a snack might be a good thing. Not wanting to mess up the place, she decided to heat boiled eggs up by chucking them in the microwave. However, she overdid it a bit and they exploded. Jen said there was egg all over her face, in the dining area, on the ceiling, and more. So, she tried again. This time, only one egg exploded.

Meri Brown’s best friend nearly had ten fits as she mopped and cleaned frantically. As one fan commented, Jen was “Going to eat an egg hell or Highwater!” Meanwhile, Meri laughed nearly to tears and asked her why she didn’t just get something from McDonald’s. Well, Jen said that the “only good thing at McDonald’s is the water.”

Loads of fans couldn’t understand why Jen didn’t just heat them in a pot or stand them in some boiling water. Nevertheless, if she did that then not so many people would have had the opportunity to laugh out loud with Meri.

Remember to check in with Meri Brown’s best friend and the Sister Wives star on Fridays for more fun and laughter on Friday With Friends.