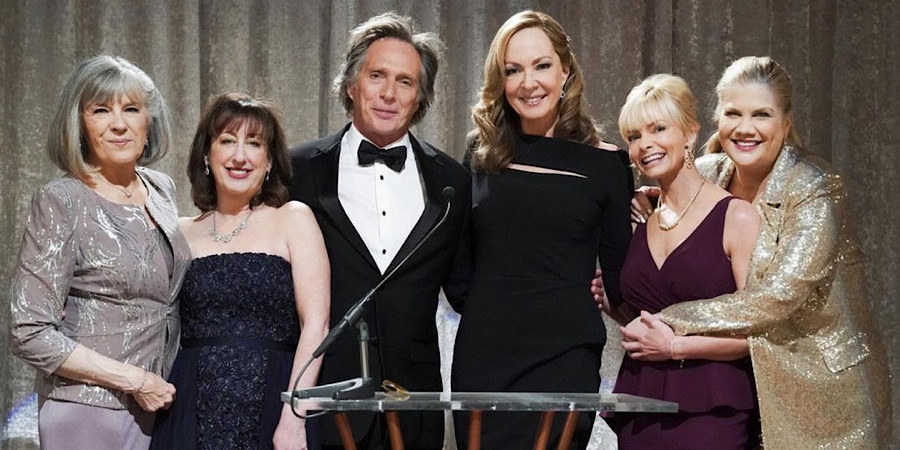 Last week on Mom, Andy and Jill reunited when they were involved in a bank robbery. It was Tammy’s sober birthday so Jill was withdrawing jewelry from her safe. She ran into Andy at the bank and they exchanged pleasantries. He went into protective mode when the bank came under attack and confessed his feelings to Jill. As for Bonnie, she was off saving her therapist, Trevor. He was contemplating getting back with his ex-wife but she said no. She helped reunite him with a missed connection and he has left for three months. It is down to the last two episodes of the series. This is very sad.

Marjorie Is Honored On Mom

After all that she has done for everyone, Marjorie is receiving the Napa Valley Community Hero Award. She has invited the ladies and a plus one to attend. Her date will be her son and everyone is beyond thrilled for her. She does not know who nominated her but Bonnie is the first to deny it. Therefore, Marjorie immediately believes it was Bonnie who did the nominating.

Marjorie asks Bonnie to introduce her at the event and she gets so excited that she announces it to the whole Bistro. Jill says she is bringing Andy now that they have been back together for a few months now. She has been reiterating this every other sentence and the ladies are over it. Bonnie cannot wait to prep her speech for the event and looks at it like a roast. She is researching famous comedians giving speeches but Adam reminds her it is an introduction, not a speech.

The night of the event, the only one with a date is Bonnie but Tammy is feeling the limo driver. Marjorie is sad her son is late though he said he will be there. At the event, Jill starts to feel really sick so she runs to the bathroom. Tammy follows and Jill requests she grabs a toothbrush and some medicine. It is almost time for Marjorie’s award but when Wendy gets up to clap, her strapless dress falls down and she exposes everything. She joins Jill in the bathroom where Tammy soon arrives with a pregnancy test. It was the limo driver’s idea to grab one.

Jill did not think of this and does not want to get her hopes up but she might as well go for it. Marjorie runs to check on her friends and does not care about her award when this is where she needs to be. It is time for Bonnie to introduce Marjorie and she breaks down realizing what a hero Marjorie has been to her. After, she meets the ladies in the bathroom with 15 seconds to go until the test will be ready. Jill is pregnant.

Andy shows up after Bonnie has texted him and he is surprisingly thrilled. Out in the dining area, the event is almost over but Bonnie pulls Marjorie onto the stage. She spots her son at the table and she is stunned as he was the one who nominated her for the award. They have officially come full circle. In the limo, Jill is eating her first chalupa and Tammy is the new driver. Next week, we will be live-tweeting the series finale of Mom, Thursday night at 9 pm on CBS.