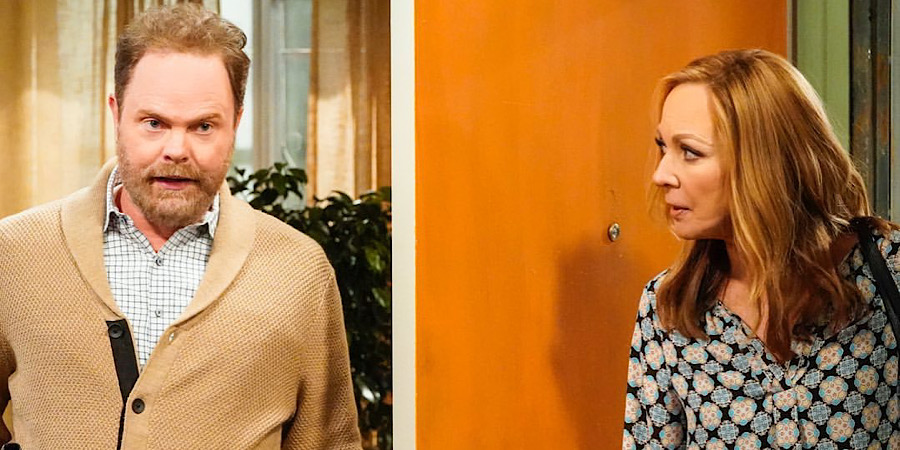 Last week on Mom, Bonnie and Tammy struggled to work together. Now that they had their own business, they had their own strengths. However, Tammy could not handle the way Bonnie would embellish her talents to get work. They got a job doing a garage transformation but it made Tammy itch. She ended up telling the man they were working for the truth and he fired them. Bonnie and Tammy decided to part ways but ended up resolving their issues and got the job back.

While speaking to Trevor, Bonnie’s biggest issue is she and Adam aren’t kissing. She feels he does not value this type of affection. Bonnie goes on to share how it all started when she was opening sauce and something about onions. Adam then said kissing did not matter much to him. This takes Bonnie aback and she tries to explain it to Trevor but he seems distracted. She tries to figure out what’s wrong and ultimately, his creepy neighbor tells her his ex-wife has been coming around. They know this to be true by a statue that’s returned to his home that the ex took.

Mom Bonnie storms back into Trevor’s apartment and asks about his ex-wife. She demands they switch chairs and she becomes the therapist. Bonnie goes on to remind him of how horrible his ex was and cannot believe he would even consider letting her back in. Meanwhile, she is missing Tammy’s sober birthday. She asks Trevor if there was anyone else he was attracted to. He brings up a girl he once knew and has looked up so she makes him call her. She happens to be single and he scores a lunch date.

Trevor and Mom Bonnie go outside and he throws the statue across the yard. The creepy neighbor says something as the wind begins to blow and it gets extremely cold. Is the neighbor even real?

Jill is at the bank picking up her diamond pin for Tammy’s sober birthday. She sees Andy sitting across from her and they begin chatting. They have great banter but soon have to duck because the bank is being robbed. He tries to protect her and eventually admits he has been thinking about her. Andy misses her and breaking up was a big mistake. They start kissing and the robbery ends.

As he is driving them somewhere (they do not know where yet), Jill asks if he meant what he said in the bank. She is not sure if it was a moment of passion or fear. He says he meant it and he has been thinking and realized he would die for her. They decide to pull over and kiss some more. At The Bistro, Bonnie shares with the ladies what happened at Trevor’s but Jill’s story trumps it all.

At home, Bonnie tells Adam Trevor’s date went so well, he is going away for three months. This scares Adam but Trevor has told Bonnie she will be fine. Only two episodes left until the series finale of Mom. Next week, Jill might be pregnant!