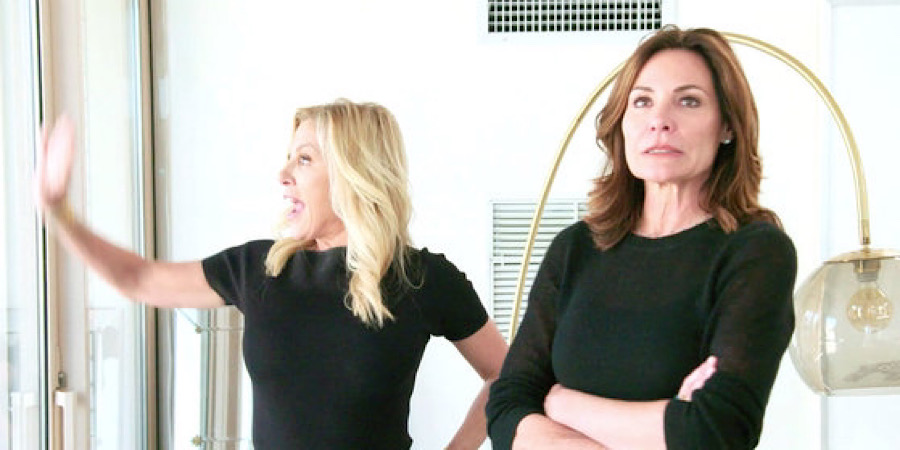 RHONY is back for Season 13 and it looks to be exciting, yet different. Gone is Dorinda Medley. She was let go after six seasons with the franchise. However, in her place is lawyer and commentator Eboni K. Williams. She will be the first African-American cast member for New York, bringing diversity to the Big Apple.

Controversial Leah McSweeney is back for her sophomore year while Heather Thomson is returning. She was a housewife from Seasons 5-7 and has made a few appearances. Apparently, she cannot handle Leah and will end up leaving. How will this year play out? Time to see what Season 13 has in store.

After a lot of soul searching during quarantine, Leah has given up drinking. She has also decided to convert to Judaism. Leah is explaining the whole process to her sister and questions if she is having a Madonna moment. It is also Yom Kippur, so she calls her dad to atone for her sins. Unfortunately, he says there is still work to do and reminds her he is not Jewish so his process is very different. For now, she is taking the conversion very seriously and will continue down the path.

Luann has moved into her new home and is neighbors with Ramona. They have grown very close and are bonding over the fact they can not reach Sonja. She has been MIA for months and they question how close they really are to her. Ramona comes by for lunch but the exciting part is Lu’s new neighbor. She had only visited the apartment once when she decided to purchase it.

After spending so much time in the Hamptons, she chose to sell her home in Kingston and move back to the city. When she has Ramona peer out on her terrace, they realize Tom’s terrace is right across the way. Yes, Lu’s ex-husband is her “neighbor.”

A New Housewife and A Brunch At Sonja’s

Leah has become friends with Eboni, who is a lawyer and commentator. She called off her engagement prior to quarantine and does want children. Yet, she has been so focused on her career and wants it all. She is very real despite the lawyer title and it is unexpected but refreshing. Over with Sonja, she had to move back into the townhouse because it was not selling during COVID. She could not afford that and the apartment she was living in so she chose the townhome.

Sonja would like to sell it but she has been off the radar for a bevy of reasons. She went to a spa and did not want the women at the townhouse. Plus, her Century 21 deal fell through when they declared bankruptcy so she feels lost. She decided to have a luncheon to get the ladies back together. Sonja calls Leah from the tub to invite her and Leah asks if she can bring Eboni. She obliges and they will now meet the new housewife.

Leah and Eboni are the first to arrive and Sonja is still not ready. She is power washing her concrete blocks in the garden because only she can do it right. When she finally sits down, she laments the two ladies about the C21 deal. Eboni starts to give her legal advice and it proves Sonja needs her very much in her life.

Can The RHONY Ladies Get Along?

Ramona and Luann finally show up at Sonja’s and they want to know all the details about Eboni. She is upfront and says she has a new man who was a friend for a year. Now, he is more than that but does have grown kids. She does want kids but that means sacrificing some things in her life. Luann talks about her new man, Garth, who is like a friend with benefits. Of course, Sonja jumps in with providing the men and the ladies steal them.

Leah says Ramona has been seen with Harry Dubin, which she denies. As for Leah, she is still kind of seeing Pita Chip from last season but needs a new man. Eventually, Ramona and Lu want to know where Sonja has been but she is all over the place. She says she traveled to spas but is slightly evasive. Ramona then says she really likes Eboni and never connects with someone so quickly. They decide to go to the Hamptons the following week and Eboni is invited.

Flashes show the trip goes south with everyone, especially Ramona and Sonja, who flip out on each other. Eboni gets heated and the trip turns into another Newport from Season 12. What did you think of the premiere? Let us know in the comments and don’t miss RHONY Tuesday nights at 9 pm on Bravo.

Is Amy King Shading Josh Duggar On Social Media?
Now That ‘Younger’ Is Over, What Is Status Of Hilary Duff’s Spinoff?
‘Below Deck Sailing Yacht’: Chef Natasha De Bourg Shares Biggest Regret
Danielle Busby Has Mixed Feelings As She Leaves Blayke Behind?
Wait, Why Isn’t A New Episode Of ‘Seeking Sister Wife’ On?!