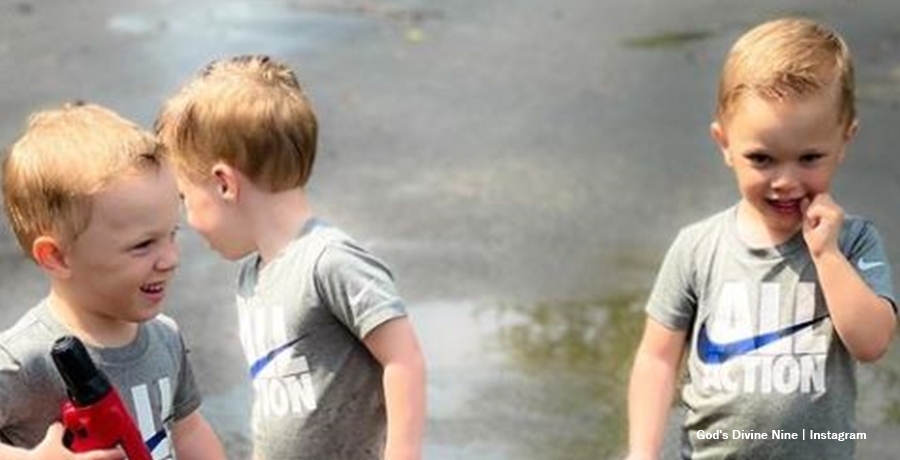 Layke & Tag Waldrop and their brother Blu get up to all sorts of mischief. Actually, the sextuplets seem to run rings around their mom sometimes. With so many active little kids, it’s no wonder she loses track of some of them occasionally. So, when they play hide and seek, she might search for them for a long time as the boys are so inventive.

On Tuesday, May 4, Courtney Waldrop took to her Instagram and shared a cute photo of Layke and Tag. They both lay down in a cabinet. One fan thought they looked like “Elf on the Shelf.” In her caption, the Sweet Home Sextuplets mom said, “Looks like Layke and Tag found a good spot for hide-and-seek😝.” Well, it wasn’t the best place for hiding as the two little boys were easily visible through the glass. However they both grinned at their mom, so obviously they enjoyed themselves.

Layke & Tag Waldrop and their siblings sometimes zoom around so much, that their mom describes them as “ants.” When she tried getting a photo of all of them together when they cycled around, she struggled. The TLC star told her fans that she had no idea they could “peddle so fast.” Well, while they seem like a handful for the busy mom, they also seem like a lot of fun. As she often says in her Instagram posts, “there’s never a dull moment.”

The boys, Layke & Tag Waldrop arrived just over three years ago with Blu and their sisters. That took the number of kids from three to nine. With their three older brothers, they all keep their mom running from pillar to post. Monsters and Critics reminded fans that April was a very busy month for  Courtney. She told her fans that it’s baseball month and Eric coaches them. That means packing up all the little kids and watching their tournaments.

Blu, Layke & Tag Waldrop along with their sisters also celebrated their birthday in April and Courtney went out of her way to make it special for them. Nevertheless, despite kids that zoom around and hide in cabinets, somehow the TLC mom manages to find the time to make and sell her own jewellery, masks and other products. It really sounds like Courtney Waldrop’s some sort of super-mom. Fortunately, she lives in a community that often lends a hand helping her watch over all the little kids.

What do you think about Layke & Tag Waldrop hiding in plain sight? Do you agree they looked like “Elf on the Shelf?” They certainly look cute enough for the title, do you agree? Sound off in the comments below.