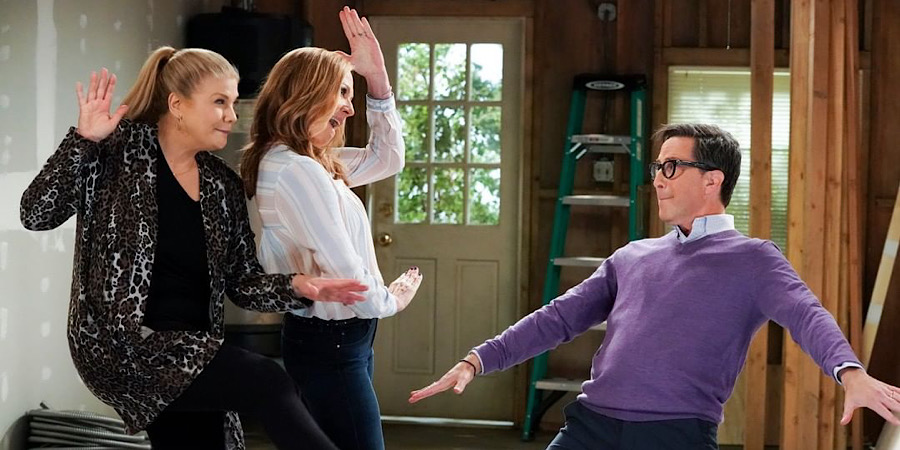 Last week on Mom, Bonnie became jealous of Tammy’s success. She took Tammy to finance her dream truck but was shocked to see her pay for it in cash. Everyone around Bonnie knew how hard Tammy had been working. She’s got her own contracting business and is full-time at Adam’s bar.

However, she is not too handy at negotiating. So, in the end, she and Bonnie decided to go into business together. Bonnie has a knack for negotiating and they can share the success. Jill started taking dance lessons and Wendy asked if she could join. Though not very good, she taught Jill how to enjoy the process. This led her to Andy’s where they both apologized and forgave one another.

PlunkenDorf Construction Starts Up On Mom

Bonnie and Tammy have started their own business together and are setting up the office. Adam is really proud of them for setting this goal. He did not realize a lot of the stuff in the office is actually from his office in the bar. When he goes to take a photo of them with their sign, he accidentally takes a selfie. He asks if his hair always looks crazy and they say yes. Finally, he takes a good photo of them and PlunkenDorf Construction is underway. Better than TamBond.

At The Bistro, Bonnie is showing off the website she helped create. Unfortunately, she has a bunch of pictures of work Tammy did not do, including Jill’s kitchen. Yes, she put up a shelf in her kitchen but that’s it. Tammy is not happy with the idea of false advertising. Bonnie also added reviews from Marjorie’s cats since she built their catio. Due to the false photos, they book a job for a man named Arthur doing a garage conversion. His mother-in-law has been staying in the guest room and he needs her out.

This is not the kind of job Tammy is familiar with but Bonnie made it look like she could do it. She also claimed they were booked solid so he jumped on the PlunkenDorf wagon. Unfortunately, the lying is not in Tammy’s blood so, at the meeting, she cannot stop itching. Wendy notices and asks her if she has hives. Tammy vehemently denies that anything is wrong.

What’s Up With Jill On Mom?

At the same meeting, Jill is venting about how she has everything she needs but is still really irritable. Earlier, at The Bistro, she announced she was giving up sugar. Her cravings for sugar seemed to get the best of her at said meeting. The ladies also took “old lady” jabs at Marjorie and then would apologize immediately after. Back to itchy Tammy who is now working on Arthur’s conversion. He comes in to check on her and to ask her about doing a skylight. She says she has never done one but her website claims she has.

Tammy gets itchy again and says in the business they call them roof peepers. He then asks her if she can do a fireplace and refers to the website again. It becomes too much for Tammy and she finally tells him the truth. She admits Bonnie lied to him but that she is great at her job just less experienced. The itching stops. Unfortunately, she has to go see Bonnie and tell her they got fired.

Bonnie is furious they got fired and cannot believe Tammy told the truth. She tells her she is the same goody-two-shoes she was when they were in foster care. Tammy tells Bonnie she has not changed either. She’s pretty much the same bad influence she always was. They decide to end their partnership and Tammy goes to rip the sign off the door. Too bad she nailed it on so well it won’t come off.

Can Bonnie and Tammy Reconcile On Mom

At the meeting, they still won’t talk and it makes Wendy so sad. Jill is finally feeling better and can be around sweet treats again. At the bar, Tammy is grunting and moaning so Adam asks if she wants to talk. She does not want to talk ill about his wife but finally has to ask what’s wrong with Bonnie. He sets a timer at first until she asks that particular question. Adam lets her know Bonnie does not do anything with complete ill intent. She was only trying to help Tammy.

Tammy’s biggest concern is always she will go back to jail. That’s why honesty is so important to her. He reminds her how far she has come and she won’t be going back. Marjorie comes by Bonnie’s to check on her as she is packing up the office. Bonnie is really hurt by the words Tammy said to her, calling her a liar and a schemer. She does not know if that is true but now the business has fallen apart. Marjorie reassures her she is great with people and everything will be fine. No, she is not being sarcastic.

Tammy comes by to apologize but Bonnie is stuck on the stairs trying to get the chair out. They both say how much they love each other. Tammy then scares Bonnie by coming in through the back. They head back to Arthur’s and are completely honest. To seal the deal, Tammy says she will throw in a skylight and Bonnie will now be taking his mother-in-law out to lunch. His MIL, Lillian is brash but the ladies all like her. Only three episodes left until the series finale. Watch Mom every Thursday at 9 pm on CBS.