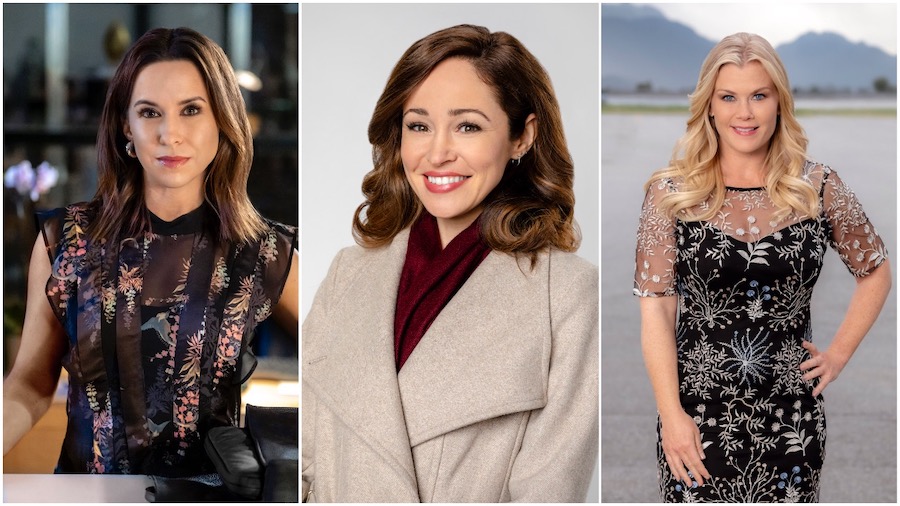 Lacey Chabert, Alison Sweeney and Autumn Reeser are three of the biggest names on Hallmark. Now imagine, they will star in an upcoming trilogy, based on a best-selling book series. This is The Wedding Veil trilogy.

Next, add Kevin McGarry in one of the three movies.

On Tuesday, Hallmark made a huge announcement. According to Good Housekeeping, the network is making The Wedding Veil trilogy. This will star Lacey Chabert (Christmas Waltz), Alison Sweeney (Days Of Our Lives) and, Autumn Reeser (90210).

The synopsis reveals that the movie will “follow three close but far-flung college friends who, during one of their annual trips together, discover an enchanted antique that changes each of their lives.” This trilogy is based on Lori Wilde’s book. Long, Tall Texan. The original title was There Goes The Bride: Wedding Veil Wishes Book 1.

It should be noted that the book description is a bit different from  Hallmark’s trilogy. The book description tells the story of a Texas socialite who accidentally kidnaps the wrong guy. She kidnaps a recently divorced detective, instead of the man she is about to marry in a few weeks.

Michelle Vicary, EVP Programming at Crown Media Family Networks is delighted with the opportunity to tell stories about “female relationships.” She told GH, “While our channel is associated with romance, a core tenet of the Hallmark brand is celebrating love in its many facets, including family bonds and enduring friendships. Our programming is reflecting that more and more. What better way to celebrate female friendships than to bring together three beloved actors from our network, Lacey Chabert, Alison Sweeney and, Autumn Reeser.”

Hallmark’s Christmas Queen, Lacey Chabert is quite excited. “This project is, quite literally, a dream come true for me and one that I have been deeply invested in. Both Allison and Autumn are incredibly talented, smart and, wonderful women and actors. I’m thrilled to be able to finally get to work with them and tell this very special story!”

For nearly two weeks, Lacey Chabert has shared some BTS photos from her latest Hallmark movie. On April 15 she wrote on Instagram, “Happy Thursday from my dressing room! I’m working on a new project which has been really fun. I can’t wait until I can tell you more about it! 🌹 Makeup @gilabois Hair @seeshelljones Costumes @jaralin & @rachelsstyle.”

However, on Tuesday, Lacey finally let the cat out of the bag. She shared a scene of her, walking alongside When Calls The Heart star Kevin McGarry, from her new trilogy. She wrote, “Having so much fun filming “The Wedding Veil” with @kevin_mcgarry_w for @hallmarkchannel👰‍♀️ #dayonepicture #weddingveiltrilogy#theweddingveil 📸 @rachelsstyle.”

At this time, there is no information on Kevin’s role in this series. Based on this photo, we may want to guess he is the leading man for Lacey’s character.

Some Hallmark Fans Ask About Lack Of Diversity

The Lacey Chabert-led The Wedding Veil trilogy is getting a lot of excitement. However, there have been some Hallmark fans that wish that there was more diversity in the cast.

One fan wrote on Twitter, “& yes, I’m bummed the trilogy centers on all-white college friends. There should be diversity anyway, but also a Lacey Chabert-led series is gonna get views & would be a great opp to give beloved Hallmark BIPOC stars some much-deserved spotlight or intro new ones to the audience.”

One response to that tweet said, “My thoughts exactly I thought this was any opportunity to hire a woman of color and, now it’s a missed opportunity. Would have been great to see a more diverse group like on @SweetMagnolias @MichelleVicary.”

Back in 2020, Hallmark promised more diversity in their programming. There is certainly plenty of opportunities to diversify the cast and live up to that promise.

When Will The Wedding Veil Trilogy Air?

Don’t make any plans to binge on Hallmark’s new trilogy in 2021. The Wedding Veil trilogy will air in 2022. Based on the fact that Lacey is wearing a cornucopia of adorable sundresses and sleeveless, summery dresses in the BTS photos, this will likely not air until the Spring, at the earliest time.

Then again, there are some wintery movies such as Baby, It’s Cold Inside premiering on May 8. This movie takes place inside the Ice Hotel. Nonetheless, they are starting to film this trilogy now, but it will air on Hallmark later. We really cannot predict when fans should expect to watch the trilogy.

Meanwhile, Lacey Chabert fans can watch her in Crossword Mysteries: Riddle Me Dead on Saturday, May 1, at 10 p.m. Eastern, on Hallmark Movies & Mysteries.