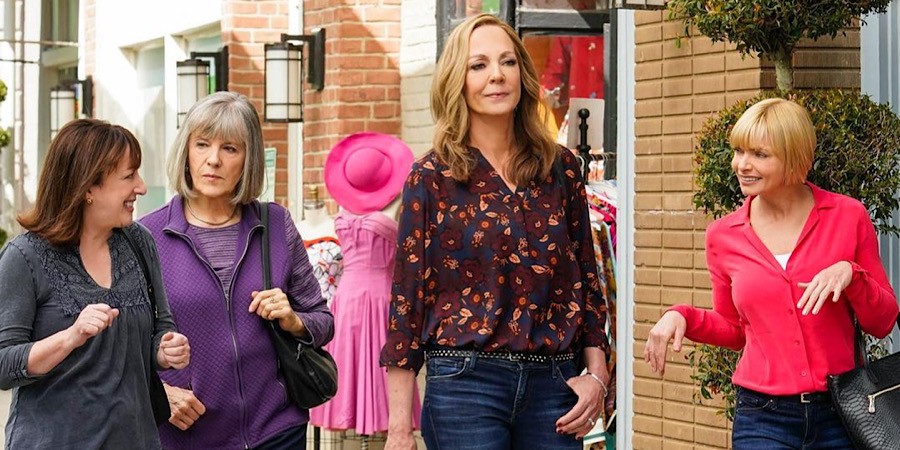 Last week on Mom, Adam decided it was time for him to make his amends. He has been going to AlAnon for some time and had written a list of women he had wronged. Bonnie accidentally found the list and saw someone named Ashley. Unfortunately, he never felt comfortable sharing with Bonnie how badly he wronged Ashley. He ended up getting arrested with Marjorie bailing him out. In the end, Adam was able to find peace with both Ashley and Bonnie.

The ladies are meeting at The Bistro when they notice Tammy is having a hard time parking. She is still driving Bonnie’s rickety old car. However, her handywoman business has become so successful, she has building equipment on top of the car. They suggest she buy the truck she has always wanted. She is unsure if she has the money for such a commitment.

At the same time, Jill shares she has started a hip-hop dance class which Wendy finds exhilarating. Jill invites her to come to class with her and she accepts. Tammy also accepts the idea maybe she should go look at trucks. The next day, she and Bonnie head to the dealership with Bonnie as the negotiator. She does a super fine job and gets the price Tammy can handle. However, Tammy does not need to deal with financing because she pulls out a huge wad of cash. Bonnie is blown away.

At home, Bonnie tells Adam she is very jealous of Tammy’s success and hates to admit it. Adam explains Tammy is a very hard worker. She is killing it as a handywoman and works full shifts at the bar. Earlier, everyone claimed she was cheap, as well.

Jill takes Wendy to her dance class. She has always been obsessed with doing everything perfectly but she sees Wendy dance. All she cares about is having fun and she is amazed by her confidence. At the meeting, later on, Wendy explains it is all about trying new things and just enjoying the process. Jill never saw it like that and they take a pottery class where Jill is horrible. Wendy just reminds her to have fun and they end up laughing when the clay hits the wall.

The experience leads Jill to go visit Andy, who she still has not gotten over. She lets him know she thought they were a failure but she learned a lot. This was her first sober relationship and she is happy she had him in her life. He admits he failed her because she wanted a family and marriage. This was not something he was ready for. She reminds him their journey was a success and she gives him something she made in pottery class.

To support Tammy, Bonnie helps her with a huge kitchen project. It ends up costing Tammy money and she lowballed the owners. Bonnie says she will negotiate a higher price, something Tammy is not great at. In the end, she helps Tammy get extra money and more jobs. Bonnie admits she is jealous but they reveal they are going into business together. Only four episodes left until the series finale. Catch Mom Thursday nights at 9 pm on CBS.