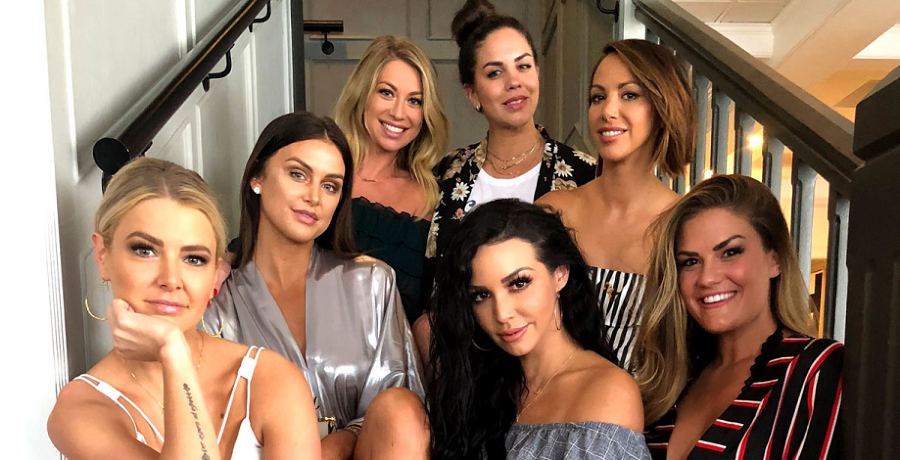 Scheana Shay continues to make headlines. The countdown is ticking for her due date. The Vanderpump Rules star is expected to give birth soon. That means “Mini Scheana” could come any day now, so be sure to follow TV Shows Ace for the latest news and updates. Earlier, we reported that Scheana showed some pregnancy appreciation before giving birth soon.

Now, it appears that she’s on good terms with Lala Kent and Stassi Schroeder. Pump Rules fans are familiar that the trio was not on good terms. Last year, Scheana and Lala had an explosive social media fight. Stassi revealed whose team she was on, and remained faithful to Lala.

Have things changed since then?

On Wednesday, April 21, Scheana Shay shared another outtake from her pregnancy photoshoot. This time, she wore a black mesh dress that showed off her baby bump. She cradled her stomach as she posed for the camera. Scheana wore her signature black hair down and parted in the center.

In her lengthy caption, she shared her pregnancy appreciation. Not only is she grateful for her “rainbow baby,” but she’s also grateful to the unborn child she lost last year from her devastating miscarriage. Her thoughtful post was a hit among fans. Even Lala Kent and Stassi Schroeder shared their support.


Most fans agreed and shared similar sentiments. Not only did they like the photo, but they also loved the messaging behind it. They took to Scheana’s post to share their excitement over the impending birth of their baby girl. What’s even more interesting is that she seems to be on good terms with Lala and Stassi again.

Last month, Scheana Shay shared her support for Lala’s own baby news. Randall Emmett first took to Instagram to share a photo of his fiance in the hospital. In the caption, he announced: “And so it begins…………” Lala’s baby couldn’t wait and she had concerns about an early delivery. Thankfully, both mom and baby Ocean are doing well.

Scheana took to the post to write: “Sending so much love and prayer to you both!!!” The reality star understood Lala’s concerns. In June 2020, she lost her baby when she was just eight weeks pregnant. After sharing the sad news, she revealed that Lala didn’t offer support, but it appears that this feud between them is over.

The Boy Crazy founder also made it clear that she would never speak to neither Stassi nor Lala ever again. On the “No Filter with Zack Peter” podcast in October 2020, she made it clear that she has no interest in a friendship with either of them. Stassi returned the favor by unfollowing Scheana on social media. At the time, it really seemed like it was the end of their Vanderpump Rules friendship.

In the meantime, we wish Scheana Shay and Brock Davies a happy and safe delivery of their baby. Check back with TV Shows Ace on this developing story.