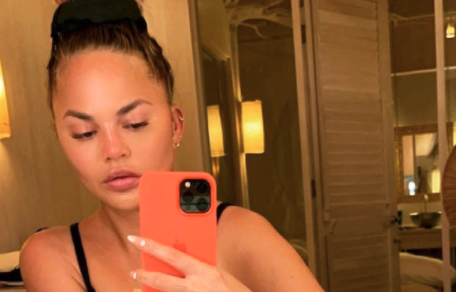 Khloe Kardashian has had a lot going on lately with a photo that was posted without her permission. Now, Chrissy Teigen is revealing that that photo actually made her think and she had to talk about it with her therapist.

Khloe Kardashian had a photo go out recently that she did not approve of. The star was unedited and unfiltered so fans could see what she really looks like. Turns out, Khloe was not happy about that. Despite all the effects the image had on Khloe, it actually got to other people as well. Chrissy Teigen for one had to talk to her therapist about body image after it came out, US Weekly says.

“I went, like, a million different ways [with] it,” Chrissy reveals. “I actually ended up talking about it in therapy, oddly enough, because of my own body insecurity issues and what celebrities have done to people in distorting their image of what a real human body looks like.”

It sounds like Chrissy is confused because Khloe should be proud of her body. After all, she has put a lot of work into getting it to look the way it does.

“You get frustrated because you look at Khloé and, of course, you’re like, ‘You’re so beautiful. You’re so strong.’ And the change that she’s made to her body, she’s so proud of and everybody’s so proud of. And you want someone to be like, ‘F—k yes, this is my body in any light,’” she says about the Keeping up with the Kardashians star.

Chrissy continues though saying it’s possible to be both proud, and scared of the same photo. Perhaps Khloe is proud of herself, but that doesn’t mean she’s ready to show the world.

“I think there can be two truths, and I think the internet often forgets there are two truths,” Teigen said. “They can’t possibly believe that someone would not want this photo out but also be proud of this photo.”

How would Chrissy handle it?

Turns out, she would want fans to know she is proud of her body. However, she knows that the things she thinks about her body are all in her head. It’s something she must work through every day. She just doesn’t want others to have to go through it.

“…It’s what we’ve done to ourselves and it’s something I try to work through every day. It’s the industry I’ve been in so long, and all you can do is hope for other people to not have to go through this,” Chrissy says.

How do you think Khloe Kardashian handled the situation? Let us know in the comments below. Come back to TV Shows Ace for more news on all of your favorite reality TV stars.

‘Love Island USA’: Flo Wants To Be The Only Girl On Will’s Lips
Roloff Farms Construction Resumes: Will It Complete Before Amy’s Wedding?!
Nanny Faye Says ‘Free Britney’ And Fans Are Here For It
Audrey Roloff Reveals Why She Kept Her Pregnancy A Secret
Not Lindsie Chrisley’s Real Father? Todd Kills With Kindness In Response